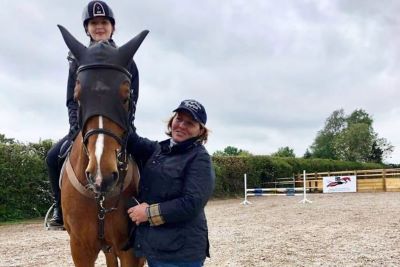 What is the proudest moment of your career so far, either in riding, equestrian, or breeding?

I have been fortunate to have had some amazing moments in my career thus far. In terms of my riding career, I have a few proudest moments, including winning the Young Riders class at the Horse of the Year Show in 1991 and being part of the Young Rider Team that won gold at the 1992 European Championships in San Remo on Welham. As an owner, Welham was an amazing horse; after my career with him, he went on to compete with John Whitaker and won so many classes. His biggest achievement was winning the Grand Prix at CHIO Aachen. Then as a breeder, it definitely has to be breeding Argento.

How did you get into the breeding side of the sport?

When John [Whitaker] was riding Welham, we were once down at Nick Skeleton’s yard and he suggested that I should get a broodmare and start producing more young horses. I thought this was a great idea, but I did not really act upon the idea until about two months later when John asked me to go and collect something for his cattle from a local farmer, and I ended up coming back with a two-year-old mare named Flora May. We bred from her aged three, before we broke her in and it all really started from there. After her first foal we jumped her for a little while before she had her second foal – which ended up being Argento.

Did anyone mentor you on how to breed successfully?

I never really had a mentor – I go mainly off instinct and gut feeling. But now, I spend more time looking at the pedigree of the horses than I used to when I first started.