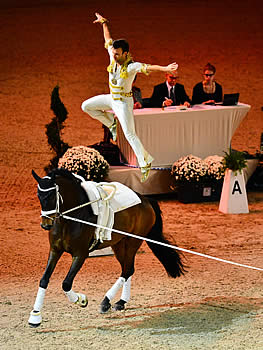 Lausanne (SUI), 5 November 2013 – The first victories of the FEI World Cup Vaulting 2013/2014 season in Munich’s Olympic stadium were secured by Germany’s Corinna Knauf and last year’s winner Lukas Klouda from the Czech Republic, with Austria’s Jasmin Lindner and Lukas Wacha winning the first World Cup pas-de-deux qualifier in the history of the series.

Many felt the most exciting competition in Munich was the pas-de-deux, which made its successful début in this prestigious series in front of excited spectators. After two rounds of high-class pas-de-deux vaulting, German national coach Ulla Ramge was clear: “It was a fantastic first run. Pas-de-deux is really thrilling for our audiences, and it is an excellent addition to individual vaulting.”

All three pas-de-deux in Munich put in outstanding performances. Jasmin Lindner and Lukas Wacha, the pas-de-deux World and European champions competing, earned 8,953 points in their second freestyle securing a clear victory on Elliot. Their lunger Klaus Haidacher was ecstatic after their win and second round maximum artistic score of 10 points. “It was a great experience in this stunning arena with such an animated audience,” he said. “We’re now looking forward to our next qualifier in Salzburg.”

“We are very happy that pas-de-deux is now part of the FEI World Cup Vaulting series,” Jasmin Lindner said. “The atmosphere was powerful. It’s not like being at a normal vaulting competition. Even the World Championships can’t be compared with the World Cup.” Her partner Lukas Wacha added: “I really hope we were able to win new fans in Munich, not just for ourselves but for vaulting as a whole.”

With a score of 8,394 points, Germany’s Gera Marie Grün and Justin van Gerven, lunged by former World and European champion Patric Looser on Danny Boy, were thrilled with second place. The pair from Cologne were the first pas-de-deux into the arena in the opening round. “It was an honour for us to open the FEI World Cup Vaulting series for pas-de-deux,” van Gerven said proudly. Austria’s Stefanie Millinger and Evelyn Freund, performing on Robin and lunged by Nina Rossin, took third place with 7,825 points.

On the first day of the individual male competition, 29-year-old Lukas Klouda on Danny Boy lunged by his coach Patric Looser was second behind Germany’s Torben Jacobs on Flash Back, lunged by Alexandra Knauf. He then convinced the four judges with his dance-theme on the final day, securing a 138-point lead. “I was happy for Torben and I hope this big success motivates him,” said Lukas Klouda. “I love my horse Danny Boy. It was only our fourth competition together and he is just awesome every time. And I really like Munich, where I won last year.”

“I’m not disappointed,” said Jacobs, who is studying medicine and trains at the same club as Klouda. “I am very happy with my performance and second place is a big deal.” Jacobs will compete with Pia Engelberty, who is currently recovering from an injury, at the FEI World Cup Vaulting qualifiers in pas-de-deux as well as the individual competitions. The pair will then focus on qualifying in pas-de-deux for the Alltech FEI World Equestrian Games 2014 in Normandy (FRA).

The biggest surprise was during the female competition. After the first day, it looked like a replica of the 2012/13 Final, with Italy’s Anna Cavallaro ahead of Switzerland’s Simone Jäiser (SUI). But in the second round, the 27-year-old Cavallaro fell from 16-year-old Harley after he was startled by excited spectators. Corinna Knauf from Cologne took the opportunity to put in a stellar performance, and climbed from third after the first round to the lead spot in the second round, and with 8,528 points she collected her first FEI World Cup Vaulting victory on Fabiola, lunged by her sister Alexandra Knauf.

The 20-year-old was thrilled with her win, coming on top of qualifying for her first senior Championship and also winning the German nationals for the first time this year. “It is an unbelievable season,” she said.

“It was just bad luck for Anna, but sometimes this happens in the sport,” said Ulla Ramge of Cavallaro, who performed a brand new freestyle to the song “Dream” by Andrea Bocelli. Cavallaro reasoned: “These things happen. I’m really happy with the score for my first test and I’m already looking forward. I will be training hard for my next qualifier in Salzburg.”

Second place went to Simone Jäiser on Luk, lunged by her mother Rita Blieske, with 8,411 points. “I am happy, but of course I will also fight for the win at the next qualifiers”, she said and added that her big wish was to see Switzerland host an FEI World Cup Vaulting qualifier in next year’s series. Third place was secured by Pascale Wagner, also from Switzerland, who performed on Viva Alegria, lunged by Michael Heuer and finishing on 8,157 points.

Austria’s Lisa Wild made her international comeback in Munich after a 14-month break following injury. The 18-year-old, in a sublime moment at the FEI World Vaulting Championships 2012, surprised the audience with an acrobatic element never before seen in competition, executing a backflip off the horse’s back and landing on the horse. The judges rewarded her with second place for her incredible routine, but unfortunately she was injured when she fell off the horse in the final and was not able to end the freestyle as planned. In Munich, she finished in fourth place with 8,066 points.

“I have missed this so much and I’m happy to be back again,” she said. “At home, in my training, everything works fine but in competition it’s totally different. Now I have to get even better mentally.”

“We’re nicknaming the World Cup in Munich the Cologne Cup,” joked Patric Looser. “We like the World Cup competitions the most – they are so much fun!”