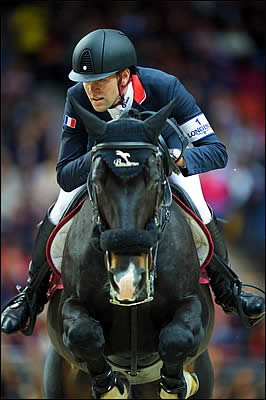 Simon Delestre, pictured in the first round of the Longines FEI World Cup™ Jumping Final 2016 in Gothenburg (SWE). FEI/Arnd Bronkhorst

Lausanne (SUI), 5 July 2016 – Olympic athlete Simon Delestre is back as world number one, having leapt to the top of the Longines Rankings, the world Jumping rankings.

The Frenchman took over the number one slot in March of this year from London 2012 Olympic team gold medalist Scott Brash, ending the Briton’s 11-month reign at the top of the leaderboard.

Simon Delestre has been lived and breathed equestrian sport since his childhood, when he watched his father Marcel compete.

His father, a national pony Jumping coach, and his close relationship with the pony Panama Cassou, owned by the French National Stud, were key to Delestre’s early career success. He won back-to-back national pony Jumping championships in 1994 and 1995. In 1999, he scored individual gold at the French Junior Championships and team bronze at the FEI European Junior Jumping Championships. The following year, he won team gold at the FEI European Jumping Championships for Young Riders and in 2009 stood top of the individual podium at the Mediterranean Games.