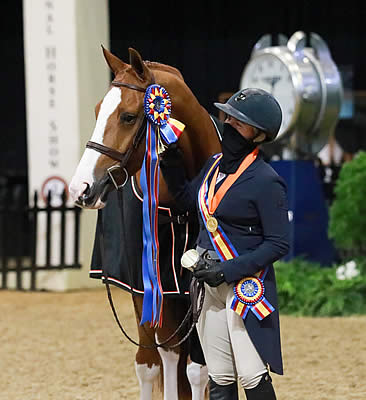 Lexington, KY – October 28, 2020 – Following Tuesday’s start to hunter divisions at the 137th National Horse Show, the first round of championship honors were awarded Wednesday within the Alltech Arena, which saw a series of awards go to the Schaefer sisters from Shadow Ridge Equestrian. Thanks to a series of winning performances that topped the field of talented contenders in the High Performance, Conformation and Green Hunter divisions, Samantha Schaefer and Take 3 LLC’S Trademark were honored with the title of Meralex Farm Grand Champion Professional Hunter, presented by Bryan Baldwin. Additionally, the Meralex Farm Leading Hunter Rider Award was also presented to Schaefer, for which she earned the Leading Hunter Rider Challenge Trophy presented by Bryan Baldwin, following her standout performances aboard both Trademark and In The Know over the initial days of the competition. In the Amateur-Owner 3’6” ranks, owner-rider Madeline Schaefer and Sutton Place received the “Ruxton & Scot To Do” Challenge Trophy for their Grand Champion Amateur-Owner Hunter title.

The first set of major awards saw Samantha staying in the ring for one accolade after the next, starting with the championship honors in the Judith Murch High Performance Hunters. She and sister Madeline’s In The Know earned the tricolor ribbon thanks to first-place trips over fences and in the handy, as well as third position in the stake and fourth place under saddle. Though the horses swapped, Samantha maintained her place in the winner’s circle, now with Trademark, to accept the Meralex Farm Grand Champion Professional Hunter Award, presented by Bryan Baldwin. The flashy gelding carried his rider to a perfect score in the Goshen Hill Green 3’6” Hunters with four first-place results, as well as top-five placings in all five of the classes in the Mrs. Kenneth Garber Green Conformation Hunters. Considering her lengthy list of standout results, it came as no surprise that Samantha’s list of achievements culminated with her being named the Meralex Farm Leading Hunter Rider.

Samantha’s trophies are the culmination of a successful year for the rider that is based out of Maryland and Florida, who rode to success at Tryon, Kentucky Horse Shows, Traverse City Horse Shows, American Gold Cup, and Capital Challenge Horse Show during 2020. Aboard her two main hunter mounts In The Know and Trademark, the trainer from Shadow Ridge Equestrian topped scorecards all around the country, both in divisional competition as well as derbies.

The Schaefer family name continued to be represented well thanks to Madeline and Sutton Place, the partnership that competed in the Hunt LTD Amateur-Owner Hunters for the Under 35 age group. Much like their familial counterparts, Madeline and the chromey chestnut gelding impressively garnered the division championship due to a perfect 40-point score following four winning rides, which also propelled them to the head of the leaderboard for the overall Amateur-Owner honors as the best-performing Amateur-Owner partnership over the 3’6” fences. Though Madeline and Sutton Place have only been paired together since the summer, the duo has made quick work of show rings around the U.S. beginning with their first event together at Traverse City Horse Shows.