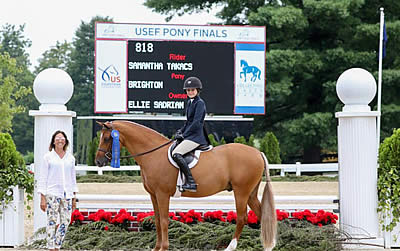 Lexington, Ky. – Aug. 6, 2019 – Hundreds of ponies descended upon the Kentucky Horse Park once again for the first day of competition during the annual installment of the 2019 USEF Pony Finals, presented by Collecting Gaits Farm, to mark the event’s 52nd year. The most celebrated event of its kind for pony riders in the United States, the USEF Pony Finals is a three-phase competition judging the pony’s conformation, way of moving, and jumping ability. With blue ribbons in both the model and under saddle phases, Samantha Takacs and Brighton emerged as the early frontrunners ahead of a pack of nearly 150 pairs in the Large Regular Pony Hunters, while Annabelle Brown and Sunshine Kid topped the leaderboard in the Small Green Pony Hunters.

Hailing from Oldwick, New Jersey, Takacs is no stranger to the winner’s circle or the pressure of leading a division head into the over fences portion of competition. In 2018, the now-14-year-old rider modeled and hacked Galianna to the day one lead in the Medium Green Pony Hunters, eventually securing the overall championship following an exemplary over fences performance. Similarly, Ellie Sadrian’s Brighton is a returning champion, boasting two major accolades from the 2018 event. With the highest cumulative score of the six divisions, Brighton reigned supreme with rider Kat Fuqua to capture the Grand Regular Pony Hunter championship title, along with the rosette in the Large Regular Pony Hunters. The partnership will jump last Wednesday as the current leaders with 544.27 total points, comprised of their scores of 266 in the model and 278.27 in the under saddle.

In the Small Green Pony Hunters, Brown nabbed the top spot on the overall scorecard with Sunshine Kid, owned by Alina Glover. Earning 258.55 points in the model, the duo was awarded second place out of a pack of 44 challengers and later returned to the Walnut Ring to with a score of 248.25 and fourteenth place in the under saddle. Sitting on a cumulative tally of 506.80 points, Brown and Sunshine Kid lead the division by just one point ahead of a hotly-contested field and will aim to retain their momentum during Wednesday’s third phase of competition.