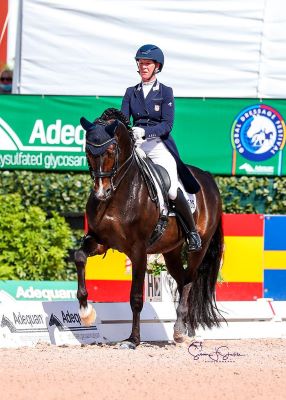 “I feel so much joy and have happy tears,” began Schut-Kery. “It’s very emotional. Aside from those feelings, to ride the test, you are focused in there of course, but it’s also joyful. It’s an amazing feeling to have an animal like that to respond to you in there with such small aids and cues. That amazing feeling is still there for me after 30-plus years, how we can communicate with an animal like that.”

The personal best score for the pair comes after a successful win on Thursday in the Grand Prix CDI5*, and Schut-Kery noted her appreciation for the team that supports the duo and has helped them get to this point.

“During the awards,” Schut-Kery explained, “I thought, ‘My gosh, there are so many people on my team, and I want to thank the ones behind me that keep a horse at that level.’ The coaches, vets, farriers, grooms, and the owners of course. When you have such a nice ride, one that you’ve been working up to, those are the things that go through your head.”

Schut-Kery noted that though Thursday welcomed a victory, it wasn’t her favorite performance, and she was happy that she was able to stick to her plan to really ace the Grand Prix Special. She said, “How many times in your life do you have a plan and you hope you can stick to it, but it doesn’t go right? This really feels like it all went to plan today. My goal was the special. I did it a week before in the National show to prepare because we had been out of the ring since November, so today was nice. Thursday was a little disappointing on my part as a rider, so it’s nice that today it worked out so well. It’s one of those special moments, and I know that I will always have to work hard for it, but it’s a moment of joy.”