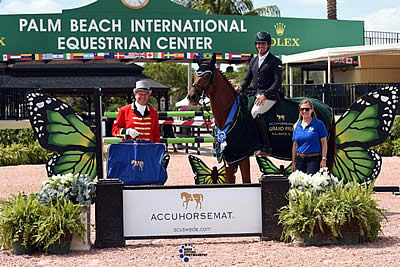 Wellington, FL – April 26, 2017 – Roberto Teran, Jr. of Wellington, FL and Il Rubacouri earned top honors in the $25,000 Accuhorsemat Grand Prix at ESP Spring III hosted at the Palm Beach International Equestrian Center (PBIEC). The pair dashed through the jump-off timers in 34.56 seconds to take the lead ahead of Emanuel Andrade and Boy IV, who took second place with a time of 34.788 seconds. Andrade also guided Bon Jovi to a top three finish, stopping the timers in 35.962 seconds for third.

Teran, Jr. and Il Rubacouri, who is owned by Teran, Jr., bested a massive class of 52 entries, who tested the track designed by Richard Jeffery. Thirteen pairs moved forward to contest the short course, while six combinations earned a double clear effort on the afternoon.

“Obviously my plan was to try and have clean round. The time allowed wasn’t too tight, so there wasn’t much pressure there, but it was technical enough and had some good questions. My horse jumped great and was lucky enough to go clear,” he commented, when discussing his plan heading in to the first round track.

Il Rubacouri is a talented mount who was jumping in CSI 2* and CSI 3* in Europe before Teran, Jr. purchased him with Juan Carlos Garcia, another Colombian rider based in Italy. Experienced for his age, at only nine, Teran made the most of his time in the ring after observing a few rounds complete the track ahead of him.

“He’s a horse that was born in Italy. I own him with Juan Carlos Garcia who is a top international rider from Colombia based in Italy. He’s a very careful, fast horse. We’re trying to move him up into the bigger grand prix classes. He was jumping CSI 2* and 3* classes in Europe before coming here,” he explained. “He’s been fantastic. He did a few big classes during the WEF circuit, including few Saturday nights. He’s a nine-year-old that is going to be very promising for the future,” commented Teran, Jr.

“There were twelve in the jump-off and there were a few very fast horse and rider combinations. There was a very tight turn to an inside oxer that I knew if I planned it correctly, it was going to be faster than the others,” elaborated Teran, Jr. “That turn, ended up being very smooth and very fast. At the point if I left up the last the three up, I knew I would be good for the win.”

The pair will now head to Kentucky to contest the spring competition before making their way up the East Coast, and ultimately secure plans to travel to Europe at the end of the summer, as Teran, Jr. is planning on meeting up with his Colombian teammates, as they look towards the FEI World Cup Finals in Barcelona, Spain, in September.

“I have a couple of grand prix horses right now and I think we’re going to Kentucky in May and then my plan is to go up to Upperville and Devon. I’m planning to finish in Europe and possibly contest the FEI Nations Cup Finals in September. We have a good team based in Europe and I’d like to go join them for preparations ahead of the competition.”

The class featured 42 entries, while 13 pairs advanced to contest the short course. Parot also guided VDL Aberlino to a fourth place finish, as he piloted both of his mounts to a strong top ten finish.

Shane Sweetnam of Wellington, FL and Samoa, owned by Anna Beth Athey, captured top honors in the $5,000 Omega Alpha 1.35m Stake, besting a class of 43 entries. The pair stopped the jump-off timers in 29.417 seconds to take the win ahead of Jimmy Torano of Wellington, FL and Diamant des Biez, owned by E2 Stabes, who finished with a time of 29.675 seconds. Sweetnam also guided Le Vio, owned by Gut Einhaus, LLC, to third place with a time of 29.903 seconds.

Ty Simpson of Wellington, FL and Why Not, owned by Simpson Show Jumping, Inc., rode to victory in the $1,500 NAL Child/Adult Jumper Classic, besting Michelle Carnes and Ushuaia, owned by Howard Lemus, as the only two pairs to advance to the jump-off round. Marlee Malamut of Vallaway, NJ and Cody, took third place after accumulating three time faults on the first round track.

Lydia Ulrich of Rochester, NY and Up Stream, owned by Beth Congel-Ulrich, topped the $2,500 Gold Coast Feed Low Junior/Amateur Owner Classic with a jump-off time of 29.173 seconds. Ashley Vogel of Mequon, WI and Twist des Forets, owned by Neil Jones Equestrian Inc., earned second place with a jump-off time of 31.156 seconds. Sophia Studd of Wellington, FL and her own Angelica Bird rounded out the top three with a time of 32. 635 seconds.

Kaitlin Porath of Charlotte, NC guided her own Breaux to top honors in the Amateur Owner Hunter 3’3″ 18-35 Division, while Brittan Bailey of West Palm Beach, FL and Jackman, owned by Bailey Mews, LLC, who were awarded with reserve champion.

The #1 Education Place Junior Hunter 3’3″ Division was championed by Adam Edgar of Leesburg, VA and Carasco, owned by Bill Schaub, while Zayna Rizvi of Greenwich, CT and Verdana, owned by Laura Wasserman, were presented with reserve champion.

Alex Elle Lignelli of New York, NY and her own Iparty finished atop the division in the Small Pony Hunter after several strong performances. Lauren Gee of Valdosta, GA and Grand Slam, owned by Sweet Oak Farm, collected reserve champion.

The Low Children’s Hunter Division saw Reese Madden of Southwest Ranches, FL and Diamond in the Sky ride to earn champion honors ahead of Isabel Beltran and her own Alleala, who finished in reserve.

The ESP management team would like to thank all of the competitors who participated in the ESP Spring III competition and their understanding and patience with the cancellation due to inclement weather on Sunday, April 23.