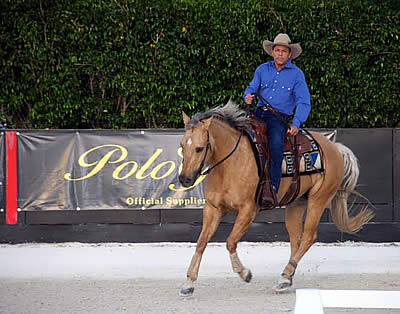 Wellington, FL – June 6, 2014 – Polo West in Wellington was abuzz with excitement on Saturday, May 31, 2014 as Western descended on Wellington. PoloGear® joined with Horse Show by Appointment (HSBA) to kick off the summer with the first of five free Western Exhibitions, receiving a phenomenal turnout for the pilot event. The community of Wellington was introduced to Western Dressage and reining, awing the crowds with their techniques, style and cowboy talent.

Admission to the event was free, and the parking filled fast as spectators lined the sides of the beautifully lit Polo West Arena to watch the horses. Many of the spectators were dressed in their western garb, with hats, boots and spurs to match the atmosphere that was carefully crafted by Palm Beach event master Bruce Sutka. A delicious cookout offered a healthy hearty western favorite of pulled pork and brisket with fresh coleslaw and beans, soda, water and beer and wine were also offered. Dogs had a blast making new friends, and there were even dog water pails conveniently located with fresh water all around. Spotted in the crowd last Saturday was Dennis Witkowski, Wellington’s first restaurateur, and the founder of the iconic Cobblestones Restaurant. Witkowski is rumored to have some involvement in “The Cowboys and Indians Western Grill and Steakhouse” scheduled to open in the Polo West Clubhouse in October. The western demonstrations were nothing short of a success with spectators promising to return for the second event on June 28, 2014.

“This was a watershed event,” remarked Gary Fellers CEO of PoloGear®. “Not only were we able to bring grass roots Western Dressage and Reining to Wellington, a goal of Jeanette’s for some time, but we did so with the help and cooperation from the Village of Wellington who is supporting the vision.”

“PoloWest has in the past been a lightning rod but there is a new spirit of help and cooperation will the Village that we are proud to be part of,” Fellers elaborated. “Special thanks to Paul Schofield, Tim Stillings, Cory Lynn Cramer, Lynn Barth and others for their help in getting the permits and making sure everything was in order. I would also like to thank Vice Mayor John Greene and Councilwoman Anne Gerwig for their support of the event and the family friendly equine activities we have planned for Polo West. I would also like to thank Glenn Straub without whose support and cooperation none of this would have been possible.”

Amy Carr, License Partner and Managing Broker of Engle & Völkers Wellington, one of the top real estate firms in Wellington and Palm Beach, recognized the gem that Polo West is to Wellington. Her relationship with husband, Dan Carr and WestWind Surfaces, opened the possibility for the ideal sponsorship for Polo West and the Polo West Brings Western to Wellington’s five-month series. The Carrs were so impressed by the event and so excited by the community’s response that they have stepped forward to provide a title sponsorship. WestWind Surfaces will install custom footing for the events, WestWind Surfaces’ specialty, as well as maintenance for the duration of series. Their sponsorship will provide the best footing on the market, making the arena the perfect place for the approaching reining, cutting, barrel racing and cow horse demonstrations. These improvements will also enhance the surface for the scheduled Friday night polo exhibitions and the Wednesday Dressage under the Stars soirée that will also go on over the summer, as well as the serious arena polo Melissa Ganzi and Grand Champions Polo Club have planned for the season.

“The improvement to the arena surface was a huge budgetary item that allows us, with Dan Carr’s expert guidance and management, to provide world class surfaces for different disciplines,” Co-founder of PoloGear® Jeanette Sassoon exclaimed. “This is a really significant development for Polo West. We could not be more excited than to have Dan and Amy as partners in Polo West.”

June 28th event will feature over 100 cowgirls and cowboys, brought to you through the collaborative efforts of Monica Lalama of Twisted Acres Ranch and Rick Steed of Steed Training, in a barrel-racing exhibition that will rock the Polo West Arena. Fast, fun, and furious action packed excitement will be sure to please all.

The events will be held on the following dates from 6-9 p.m. with an after party running from 9-12 p.m. in the Polo West Clubhouse. Watch for announcements for live entertainment from Florida’s own homegrown top country rock bands that may accompany each event.

Rick Steed of Show by Appointment will once again lead eight horses throughout Wellington in the “Polo West Pony Express” prior to each event to hand deliver invitations, and Tom DiRocco of DDC Corp. will be streamlining the events. HSBA, a reined cow horse show company that offers fun, fair and affordable shows for riders of all ages and skill levels, is planning to move its home base to Wellington for the 2015 show season and the 2016 $100,000 Championship Finals. With the generosity and support of PoloGear®, the Polo West Brings Western to Wellington series is the perfect introduction to everything the western discipline has to offer.

PoloGear® began to build a relationship with HSBA shortly after venturing into the realm of western dressage. The expansion into the western discipline was a natural progression for the Wellington-based company. Already very much involved in the disciplines of polo, jumping, and classical dressage, PoloGear’s founders Jeanette Sassoon and Gary Fellers also have a tie to the traditional western community through their ranch at the base of the Big Horn Mountains in Parkman, Wyoming.

Sassoon got her first introduction to western dressage through a very special blind paint horse by the name of Cherokee. Originally given to her as a companion for her 24-year-old Prix St. Georges dressage horse Valiant, who was also blind, Cherokee is trying his hand (or hoof) at western dressage with Sassoon. Sassoon rode Cherokee to the National Anthem during the opening ceremonies while flying the American Flag.

June 28, 2014 will be the second of five events that will wow and amaze the crowds, bringing the Wellington community together at Polo West for a night of good old-fashioned cowboy-fun.

PoloGear® has been a staple in the Wellington equestrian community since 1993. They offer top of the line apparel and design, as well as premier saddles offering their patented Free Shoulder Saddles™. Always seeking more avenues to best serve clients and their horses’ needs, PoloGear® recently joined forces with Trilogy’s Debbie Witty, creating Performance Saddlery, a division of Polo Gear®., in an effort to expand nationally and utilize Witty’s expertise to take saddle design to the next level. In addition to selling the proven Trilogy® saddles the national force of Performance Saddlery fitters will also be selling the Verhan saddle line as well as all the PoloGear® Teamshop™ products.

PoloGear’s dedication to quality and attention to detail is never lost in their production. For more information on PoloGear® USA and to order products, visit www.PoloGearusa.com.

What: PoloGear® is bringing Western to Wellington starting Saturday, May 31, 2014 at Polo West. The family-fun series will be the talk of the town, offering family-friendly events, western demonstrations, cookouts and an after party. Each event is free, and will run from 6-11 p.m. Wear your bolo ties, cowboy boots and grab your hats for an event unlike any other. Dogs are welcome as well, so don’t forget to dress up your favorite furry friend and bring them along for a good old western time.

Remember this event series is Free to spectators, so be sure not to miss the fun!