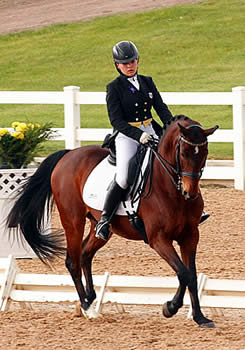 Parker, CO – June 6, 2014 – The first dressage shows of the season at the Colorado Horse Park’s High Prairie Dressage I, II and III kicked off May 30 – June 1 with successful results for Young Rider Devon Wycoff, and seasoned veteran, K. C. Parkins-Kyle.

Wycoff, a 20-year-old film and drama student from Boulder, CO, and Power Play, her own 17-year-old Oldenburg gelding (Pik Noir Feldessa, Top of Class), took the opportunity to fine-tune their tests and freestyle before the 2014 U.S. Dressage Festival of Champions to be held next week at the USEF Headquarters in Gladstone, NJ. The duo placed second in the FEI Young Rider Team Test with a 68.947 percent, and went on to sweep wins in the Young Rider Individual Test with a 70.197 percent and the Young Rider Freestyle with a 71.43 percent.

“I think this past weekend went well,” Wycoff said. “I was pleased with the quality of horse I had in the arena all three days. It was important to me to see what works and what doesn’t in both the ring and in the warm-up.”

She used the warm, friendly atmosphere at The Colorado Horse Park shows to help her gain confidence in the arena after a recent shift to a more correct approach to riding.

“I grew up showing there starting when I was 9 years old,” she said. “I love that place. The staff is like a well-oiled machine. They are always so friendly and they are there whenever you need something. It is incredibly refreshing to have a show grounds that takes the footing so seriously. The footing has always been a priority for the CHP, and it shows. The facility, the staff and the overall show experience have always been top notch for me. I always look forward to showing at the Colorado Horse Park every year!”

The experience at the show helped her focus her attention before heading off to New Jersey for the Festival of Champions.

“Really, it’s all there,” she said. “It now comes down to finding that confidence in my own riding with this new approach, especially in the show arena. In the long run, I think it will help Player move up the levels and be fitter as well as prepare me to be a knowledgeable and correct FEI rider. I think just this past weekend the training and my own confidence with the training started to click in the show arena – we still had some mistakes that are costly but I am very happy with how fit Player feels.”

She added that it was only the second time they had ridden the Freestyle in the arena.

“The actual pattern and test itself was a bit all over the place and I am finding there are still some kinks to be worked out in the music but, like I said, Player felt super and we received quite a few 9s on movements, so I am very happy with that,” she said.

Wycoff believes Power Play, whom she also calls Player, Power Noodle, or just The Noodle, is the hardest worker she has ever had the pleasure of riding.

“I adore him with every fiber of my being,” she said. “He enjoys long walks on the beach and is very committed to his vegan diet and his favorite book is ‘A Tail of Two Cities.'”

Perkins-Kyle, a United States Dressage Federation (USDF) Gold Medalist based out of Hidden Ridge Farm in Franktown, CO, and Olaf earned scores of 61.400 percent and 59.006 percent in the Grand Prix. She and Hudson earned the blue ribbon in Sunday’s Prix St. Georges with a 66.974 percent and third place in Saturday’s Prix St. Georges with a 62.763 percent.

“Although the judging was tight, it was very fair and accurate,” Kyle said of her tests on Hudson. “My ride on Sunday was probably one of the better ones I’ve had on that horse.”

Their partnership is only about a year old and she expects the horse to move up into Intermediaire with an eye toward Grand Prix.

“I’m working on a freestyle but they don’t have those at Prix St. Georges, so that means I’m going to have to get to some I-1s,” she laughed. “I like doing the freestyles a lot anyway. I hate to say this because it’s not the type of music I like, but I think Hudson will be going to some disco. I went through that the first time and I don’t know why I want to do that again but I won’t be wearing a leotard or a satin shirt.”

Celebrating its 21th Anniversary, the Colorado Horse Park was founded by visionary Helen Krieble who acknowledged the need for a high-volume horse show and horse boarding facility to serve Colorado. The Colorado Horse Park welcomes more than 35,000 visitors per year and hosts over 40 competitions annually. CHP features a derby arena designed by Olympic-designer Linda Allen and a cross-country course designed by Olympic Gold Medalist, David O’Connor. There are 300 permanent stalls with capacity to house more than 1,000.