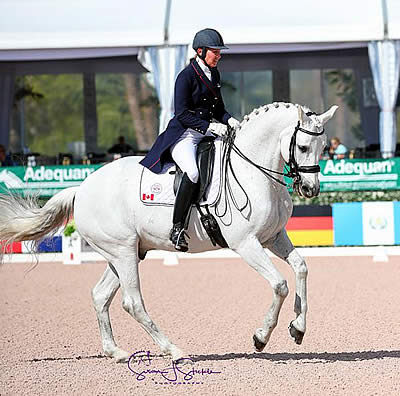 Wellington, FL — February 25, 2018 — All three podium finishers in the Intermediate I Freestyle CDI3*, presented by Wellington Regional Medical Center, topped 72%, but it was Canada’s Diane Creech who emerged triumphant. She scored 72.925% on Louise Leatherdale’s Robbie W on the final day of week seven of the 2018 Adequan® Global Dressage Festival (AGDF) at Palm Beach International Equestrian Center (PBIEC) in Wellington, Florida.

Creech overtook the long-time leader Jennifer Baumert (USA), who was drawn first to go of the 14 starters and laid down 72.125% on Elizabeth ‘Betsy’ Juliano’s Handsome, a 13-year-old Hochadel gelding. The USA’s Melissa Taylor, last to go, pulled out all the stops on Nicole Polaski’s Special D gelding Ansgar. Their 72.275% was enough to slot snugly into second place, handing victory to Creech.

“He was so great in the freestyle; he enjoys the music so much,” said Creech, who was riding to a compilation by Karen Robinson. “Robbie has the best character — he talks in his sleep — and he thinks every human he interacts with is a nice human. He lives in his own little happy bubble because nothing bad has ever happened to him. He’s so laid-back yet so consistent and really loves his job. Grandmothers could go out hacking on him. We call him Perfect Robbie; he’s so much fun to have.”

Creech and Leatherdale found the horse at Blue Hors Stud in Denmark after seeing him on video around six years ago and flying out to try him.

“We knew right away he was the one; you sit on a horse and you just feel connected or you don’t. With him, I was totally connected. He was still very dark dappled grey and his temperament was outgoing — he’s a horse who’s been loved all his life and he believes in the goodness of people. He wakes up happy and goes to bed happy,” added Creech, 55.

The 15-year-old gelding by Rubin Royal out of a mare by Inschallah is so relaxed that even the 27-hour journey by road from Creech’s home base in Canada doesn’t faze him.

“It’s a bit of a hike, but he does not stress,” added Creech, who is hoping to contest the Pan American Games — which are a small tour contest — in Lima, Peru in 2019.

The winner of the two previous small tour classes in week seven, Heather Blitz on Praestemarkens Quatero, had to settle for seventh after an expensive mistake in the pirouette work.

Kerrigan Gluch (USA) was the best of the five entrants in the under-25 Grand Prix Freestyle, coming tantalizingly close to 70%. The 22-year-old rode Hampton Green Farm’s 14-year-old Spanish stallion Bolero CXLVIII to 69.95%.