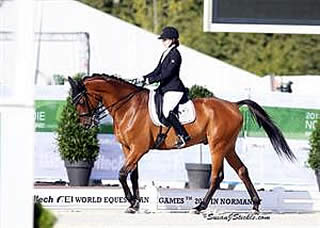 Caen, France – Nations took the next steps in earning Para-Dressage Team medals, as riders also had their first opportunity to claim Individual medals at the 2014 Alltech FEI World Equestrian Games on Wednesday at the La Prairie Racecourse. Grade III and 1b combinations went to task throughout the day, as the U.S. was represented by Angela Peavy and Sydney Collier.

In the Grade III Championship, Peavy (Avon, Conn.), competing as an Individual, closed out her first World Championship experience in the Individual Test on Rebecca Reno’s Ozzy Cooper. In their second test of the World Games, the combination earned a score of 63.561% from the Ground Jury of Alison King, Eva Bachinger, Kjell Myhre, Hanneke Gerritsen, and Marco Orsini.

“I thought it went very well. He was very focused with me: more energetic, up and powerful. I was very happy with him, and I was more relaxed than the first day,” said Peavy. “He’s really focused on me, and we are in our own little bubble. We are very concentrated on his job and performing well.”

Germany’s Hannelore Brenner and Women of the World earned the Gold medal in the Grade III Individual Test on a score of 73.610%, with The Netherlands’ Sanne Voets and Vedet PB N.O.P. claiming the Silver medal on a score of 72.053%, and Annika Lykke Risum and Aros A Fenris of Denmark earning the Bronze medal with a score of 69.868%.

Collier (Ann Arbor, Mich.) and Victoria Dugan’s Willi Wesley had a marked improvement in the Grade 1b Individual Test over their Team Test on Monday. The combination earned a score of 68.103% from the Ground Jury of Sarah Leitch, Anne Prain, Hanneke Gerritsen, Eva Bachinger, and Freddy Leyman. The 16-year-old was hoping to build on her performance from Monday and earn a finish within the top 12 in the Individual Test. They were able to do just that as she notched a ninth-place finish on Wednesday.

“That made me so happy. I really took Monday to just figure out what I needed to improve. I schooled him with that in mind. I was really happy with how that all came out,” said Collier. “My whole career has been leading up to this so far. For my first Games, I would be extremely thrilled with this outcome.”

The winners of the Grade 1b Individual Test Gold medal were Lee Pearson and Zion of Great Britain on a score of 77.310%. Pepo Puch and Fine Feeling S of Austria claimed the Silver medal on a score of 76.520%, with Silvia Veratti and Zadok of Italy earning a score of 72.00% and the Bronze medal.

To learn more about the Para-Dressage Championship at the Alltech FEI World Equestrian Games, visit: http://www.normandy2014.com/2014-games/the-disciplines/8/para-dressage.