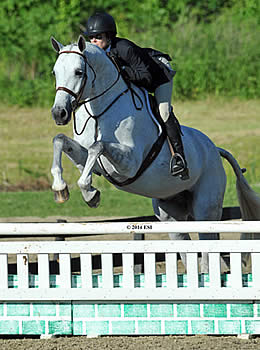 ©ESI Photography. Patricia Griffith is well on her way to another Diamond Mills $500,000 Hunter Prix Final win, this time with Platinum.

SAUGERTIES, NY (June 8, 2014) – Patricia Griffith of White Plains, New York is back in top contention for the Diamond Mills $500,000 Hunter Prix Final, after a pair of 90s gave her and Platinum, owned by Lexi Maounis, the Devoucoux Hunter Prix win this weekend. They topped a field of 38, posting a score of 180 – eight points higher than second-place finisher Laena Romond of Colchester, Vermont and Heritage Farm-owned Shoemaker.

Platinum and Platinum have been here before – they qualified for the Inaugural Final in 2011, as well as 2012 and 2013. She ultimately chose to compete Sienna all three years and won in 2012. This year however, it might be Platinum’s turn. “He’s my choice for the upcoming qualifiers and has real potential to take me to the final this year,” said Griffith of the 13-year-old Warmblood gelding.

“I know him well – rode him as a pre-green and first year. He’s lovely, smooth, balanced and really fun,” she said.

“Plus this [Outside] course at HITS is always interesting and you can never take the bank jumps for granted,” noted Griffith. “Last week we had trouble coming down the hill, so focused on it this week and redeemed ourselves.” Griffith put Platinum’s floating stride to work, catching beautiful distances with seamless lead changes throughout.

Fellow Heritage Farm riders have dubbed Griffith’s return to Platinum’s tack a “HITS Saugerties reunion,” and successful one at that. The farm went one-two in the Devoucoux, as Romond and Shoemaker scored a pair of 86s for a total of 172 and second. After a win last week with Cascor’s Splendor, David Oliynyk of Franklin, Massachusetts again finished in the top three, this time in the irons of Lori Gaudet’s Generous. He scored an 85.5, which they repeated in the second round.

Heather Caristo-Williams of Saugerties, New York and Cornetto Royal, owned by Mr. & Mrs. Ralph Caristo, continued their consistent rounds with scores of 80 and 86 — holding them steady at forth. Morgan Ward of Milford, New Jersey rounded out the top five with scores of 82 and 82.5 on Redfield Farm’s Coke Z.

This weekend marked the completion of spring qualifiers for the Diamond Mills $500,000 Hunter Prix Final Championship on September 7. Competitors will continue to battle it out for the title, and $500,000 prize, when they return to Saugerties during the HITS summer series July 16 through August 4.

$1,500 Platinum Performance Hunter Prix
Kathryn Haefner has seen her fair share of HITS Championship glory, and watched her mare La Bonita win the Diamond Mills Hunter Prix Final with Jimmy Torano in the irons last year. Now she’s aiming for the Platinum Performance $250,000 Hunter Prix Final, except she’s in the irons, riding her other horse Columbus. Today the pair came one step closer to that goal, winning the $1,500 qualifier.

They bested 29 other competitors and rode to an 88 in the first round and posted a 90 in the second for the win.

Madeleine Stover of Chester, New Hampshire rode Elizabeth Richter’s Concierge to an 83 and 85 for second. Third was Kendal Fately of Basking Ridge, New Jersey with scores of 87 and 79 aboard her own Magnetic.

Merle Beach of Vergennes, Vermont finished fourth on her own Cosa Nostra with an 80 and 83. Rindy Dominguez of Barrington, Rhode Island and Eclipse rounded out the top five with an 86 and 73.