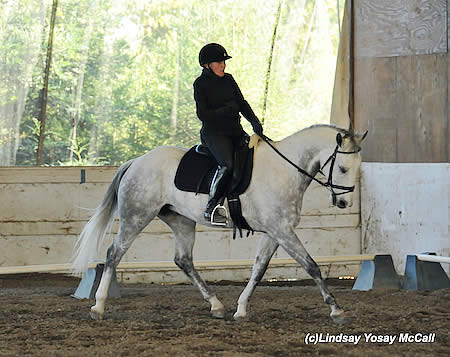 Para-reiners saddled up December 6 in Oklahoma City for competition during the National Reining Horse Association Futurity. Para-dressage rider Lara Oles of Utah nabbed the top score of 70.5 on Western Whiz in her ninth ride on a reiner.

“This was the best thing that ever happened to me, and that score blew me away,” Lara said. “This horse – if I didn’t get a good score on him, I’d have felt bad, because he’s so talented.”

Western Whiz is a 2003 bay gelding by West Coast Whiz and out of Cameos Brite Star by Black Star Leo. He was bred by Roberta M. Witt of Williston, Ohio, and is owned by Robert N. Thompson of Pilot Point, Texas. He has $123,642 in NRHA earnings.

“This horse is so responsive,” Lara said. “Every day, we get more connected and I learn more of his cues. He loves his work. If you ask him right, he’ll do it. He wants to do it. (Riding the pattern) was easy. Once I learned his cues and to sit still and let him do his job, he makes it easy.”

Lara and many of the other para-reiners spent a week before the competition practicing at trainer Lisa Coulter’s facility in Pilot Point, she said, developing camaraderie with their competitors and with their horses.

“I was lucky Lisa gave me her Cadillac to ride – the long straw,” Lara said. “It was amazing. It was the most fun. This is only the ninth time I’ve ever ridden a reiner in my life. (Para-dressage and para-reining) are very similar. You have to be precise. It’s a discipline. People might think you’re hoo-hawing around, but you’re not.”

Lara’s not quite ready to give up her para-dressage saddle yet: She hopes to qualify for the 2016 Paralympics in Rio de Janeiro.

“I’d love to have para-reining added to the World Equestrian Games,” she said. “Someday, that will happen, but for now, I’m enjoying this class. I’m in love with this sport.”

Para-reining made its debut during the 2013 AQHA World Championship Show, and interest in the sport continues to grow, including a class at the 2014 World Show, a class at the Kentucky Reining Cup and the one at the NRHA Futurity.

For 2014, AQHA adopted para-reining rules in collaboration with USA Reining and NRHA. Those rules will be revised after this test year and with the cooperation of the United States Para-Equestrian Association with the goal of making para-reining a nationally recognized sport in 2015.

This press release content is from The American Quarter Horse Journal. To view photos and video from the event, please visit: http://www.aqha.com/Journal/Coverage/2014/December/12082014-Para-Reining-at-the-NRHA-Futurity.aspx.