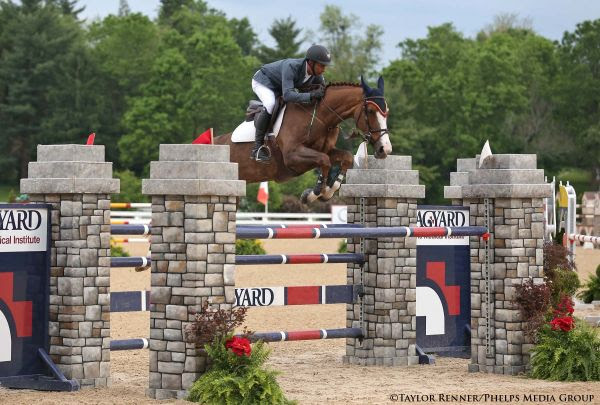 Lexington, Ky. – May 12, 2016 – The 2016 Hagyard Challenge series, sponsored by the Hagyard Equine Medical Institute, kicked off its eleventh year at the Kentucky Horse Shows on Thursday evening with the $35,000 Hagyard Lexington Classic. Sixty-six horse and rider combinations went head-to-head in the CSI3* competition, but it was Pablo Barrios (VEN) who took the victory with ASD Farfala. The talented pair beat out of a field of 14 during the jump-off, tripping the timers in a speedy 37.940 seconds.

Riders battled the elements during Thursday’s class, but the rain did not faze ASD Farfala, owned by Barrios, who has only been riding the 12-year-old Warmblood mare for a month. The Kentucky Spring Series marks their first horse show together, but the two are already demonstrating a winning partnership.

“I’ve known the mare for a long time,” said Barrios. “It belongs to a very good friend of mine, Americo Simonetti. He is a legend in the sport in South America from Chile and he kindly let me ride this wonderful mare that I’ve known for a long time.

“The mare came to the Winter Equestrian Festival with a rider from Chile and when she was about to go back to Chile I called him and asked if they could leave her with me,” continued Barrios. “I love the mare and I think I can do a great job with her. It’s amazing, when you have a good horse, how easy it is to go clean and fast. This is my first horse show with her. I was concerned about whether to put her in a lower class, but she’s so smart and talented I thought, ‘Why hold her back?’ So I went straight to it. When I call [Americo] again he is going to be very happy!”

Aaron Vale (USA) and Quidam’s Good Luck, owned by Troy Glaus, were the early pathfinders as well as the fastest pair to navigate the technical first round track, designed by Bernardo Costa Cabral, finishing in a fault-free effort of 74.100 seconds. The two later returned to the jump-off finishing double clear in 38.210 seconds, just one second behind Barrios claiming second place honors.

“Quidam’s Good Luck is a fast horse,” said Vale. “It was a nice galloping track with smooth, sweeping turns, which really suits him. We just took a shot. He feels like he’s going well and he likes this ring, so we took a shot. We had a really quick round. I just couldn’t leave one out to the last on him. We put in a great round and Pablo just beat me by fractions, so can’t complain too much!”

“I saw Aaron and I knew he was very fast,” said Barrios. “I knew he had a horse behind me and I really tried. I saw him doing seven strides one to two. My plan was to do six or seven with her and I made it and I think any other horse would have had fence 15 down but she just left it up because she is amazing. I’m so excited with this mare and I’m thankful to get to ride her.

“The winners always say that the course is really good, but we were talking before the class with all of the riders and I mentioned that every single class has been very well designed so far,” said Barrios. “I think this is one of the difficult classes to build. He had a great jump-off, a great class and I was very excited. Not because I won but because I like it, and it’s always very nice to beat Aaron because he is very fast!”

Barrios is no stranger to the winner’s circle at the Kentucky Horse Shows. He won the Hagyard Challenge series back to back in 2013 and 2014 and is already off to a strong start in the 2016 series.

“I have a good vibe here; I feel like this is home,” said Barrios.

“Every time you come they have done something new” said Vale. “The rings are great, they always get top-notch course designers and they have a great set of jumps. It’s a top quality product and it’s great to be here. I showed here for the first time in 1988. Jumpers back then were on the grass where the Claiborne Ring is now!”

Barrios is also set to compete on the Venezuelan team at the Rio Olympic Games this summer with Antares, his 11-year-old Dutch Warmblood gelding.

“I’m going with Antares,” said Barrios. “I’m showing him very lightly. He showed three times at WEF. I used him a lot last year because my mare got hurt. I’m starting to use him a little bit more and working on the fitness when I run him so he gets a little cardio. This is the time to do it before the Games.  Then, I’ll keep him a little fresh for the Games; that’s the plan.

“I want to thank Devoucoux, Purina and MDC Stirrups – without those stirrups it’s very hard to ride in the rain so that’s very awesome that I was wearing them tonight. Also Animo, my new sponsor of boots, Parlanti and Choice of Champions.”

The Hagyard Challenge series consists of seven grand prix classes to be held during the 2016 show series at the Kentucky Horse Park. Following the final event, a cash prize of $50,000 will be awarded to the rider accumulating the most points throughout the series as well as a $10,000 prize for the reserve champion.

“Anything that gives us a chance to make a little extra money you have to appreciate,” said Vale. “They have been great supporters for 11 years. It sure is a nice thing for us to have a chance to get a rider bonus at the end of the year. It’s good for the horse show, good for Hagyard and good for the riders.”

New this year to the Hagyard Challenge series is the $200 Best Turned Out award, sponsored by Bob Mickler’s. The award goes to a well-deserving groom following each grand prix. Following Thursday’s competition Andre Luis, groom to Mark Bluman and Uitteraard of Stransky’s Mission Farms, won the first Best Turned Out award of the series.

Kelley Farmer and It’s Me had another banner day in the Stonlea Ring at the Kentucky Spring Horse Show Thursday claiming the Hunter Grand Championship sponsored by Visse Wedell at Douglas Elliman Real Estate.

Farmer swept the over fences classes in the Green Conformation Hunters with the 8-year-old Warmblood stallion It’s Me, scoring the division championship and going on to claim the Grand Hunter Championship.

Wedell has been a great supporter of the Kentucky Horse Shows sponsoring grand championship prizes in multiple divisions. “I love that a stallion won,” Wedell said. “Kelley actually rode a horse of mine a long time ago for me so I’m thrilled that they were able to be Grand Hunter Champion at the first horse show here in beautiful Kentucky.

“I love this facility so much,” added Wedell, who recently purchased a property nearby. “It’s such a pleasure to be here I’ve officially decided to based myself here for the season, so I’ve invested myself personally in the area because I love it here so much.”

Farmer was thrilled with her win today as It’s Me is a special horse for her. “He belongs to Sue [Pinney] and my mom [Bibby Hill] and I,” Farmer explained. “The last one my mom owned was Scripted. It is really special for mom to own a part of him with us.”

Farmer was full of praise for the Kentucky Spring Horse Shows. “I love this horse show,” She said. “They do such a nice job, the jumps are beautiful, the footing is beautiful, the horses go perfectly and this is home for us now.”

It’s Me is clearly a fan of the show as well. “He’s been fantastic from the first day he’s been here,” noted Farmer. “He tries hard. He finds ways to win and he tries to win blue ribbons. He’s a great horse. I’m excited for Devon!”

“We always come here because we stay in Florida and this is sort of on the way home,” Stewart explained.  “We take a little break after showing and this is our first time back. It’s always a nice place to come to get ready for Devon. Florida is great, but there’s so much going on. When they get here they get to be turned out and relax more. A lot of the young horses really mature and when they come here, they just relax.”

Catch Me clearly benefitted from this stop on the way home from Florida. “Catch Me is awesome,” Scott said.  “He hasn’t shown since the night class in Florida. He was good there so we stopped showing. He had a month of just hacking and then I jumped some little jumps with him after that, so this was his first time back and it was great!”