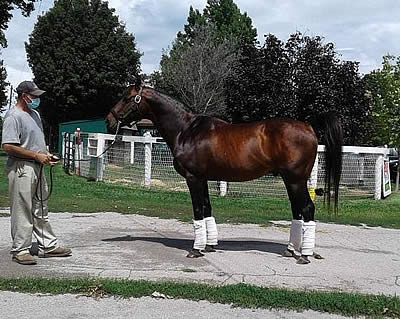 A homebred for owner Marylou Whitney and trained by Nick Zito, Birdstone captured the G1 Champagne Stakes as a two-year-old in 2003. Birdstone ran up the track in the Kentucky Derby and sat out the Preakness, before surprising most of the sell-out crowd when he got up in the final yards in the Belmont Stakes to ruin Smarty Jones’ try for the Triple Crown. That summer, at Saratoga Race Course, Birdstone proved that the Belmont was no fluke when he added a victory in the Travers Stakes to his impressive resume.

The son of Grindstone, out of the Storm Bird mare Dear Birdie, Birdstone retired from racing in 2004 after a chip was found in his left front ankle after his final start was in the GR1 Breeders’ Cup Classic. Birdstone retired with five victories from nine starts and earnings of $1,575,600.

He spent his stallion career at Gainesway Farm in Lexington, KY where he became one of very few sires to have produced a Kentucky Derby winner in their first crop, when Mine That Bird captured the 2009 Run for the Roses at 50-to-1 upset in 2009. That same year, his son Summer Bird repeated his sire’s efforts by winning both the Belmont and Travers Stakes.

“We are so grateful to John Hendrickson for allowing Old Friends to care for Birdstone in his post-breeding career,” said Blowen. “He’s a living tribute to the late Marylou Whitney, and we plan to carry on her great contributions to the aftercare of both humans and horses,” he added. “We’re extremely grateful to John for trusting us to care for his tremendous stakes winner. Birdstone had a great life at Gainesway and we plan to continue that tradition at Old Friends.”