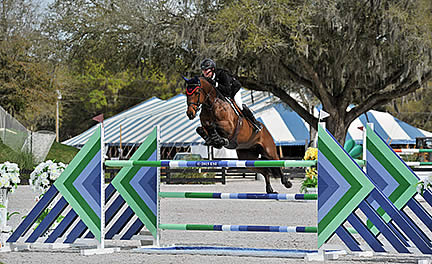 OCALA, Florida (March 12, 2015): Michael Hughes of Allendale, New Jersey, riding his Luxina, topped a field of 31 contenders and nine in the jump-off to win the $25,000 SmartPak Grand Prix with one of only two clear rounds in the jump-off. The Dutch-bred Luxina is only 15.2 hands but Hughes used her big stride to his advantage for the win.

Aaron Vale and Hunter Holloway each had two horses in the jump-off but neither could match Hughes’ performance. Hughes said of the win, “The course had a lot of options. My horse doesn’t spend a lot of time in the air and she has a really big stride. She’s always better when you really keep up the pace and just keep galloping.”

Vale and Acolina R were the first to attempt the short course but had two rails down for eight faults. Hughes was up next and, knowing that there were seven more to follow, pulled out all the stops and rode clear in 38.104. Two four-fault and two eight-fault performances followed, including David Beisel and Amaretto, the winners of the $50,000 HITS Grand Prix Week VI, with four faults and a time 40.113 for fourth place.

Scott Keach and Southern Cross Equestrian’s Viriato were able to turn in the only other clear round in 40.533 to earn second. Keach has had 10-year-old Viriato for a year-and-a-half. He said, “I went at about 85 percent. There was only one place where I could have left a stride out. I wanted to go fast but leave them all up.”

The final horse to enter the jump-off was Cassevel with new owner Hunter Holloway, who posted the fastest four-fault performance in 39.467 for third place. Wednesday’s Brook Ledge Open Welcome winner Lexy Reed and Afandina had four faults for fifth place. Reed said she was happy to show in her first Grand Prix in six years and it was also her new horse’s first Grand Prix.

Lexy Reed from Beaver Falls, Pennsylvania won the Brook Ledge Open Welcome two weeks ago, and won it again Wednesday by turning in the only double clear of the day. Reed has had 8-year-old Afandina for just six weeks and is thrilled with the repeat win.

“My horse was so good today,” she said. “The time allowed was so tight that you had to ride the first round like a jump-off. I cut inside on one of the rollbacks and just kind of ran everywhere else.”

Fourteen riders had time faults in the first round with only three clear rounds within the 83 second time allowed. The 1.4 meter course, designed by Manuel Esparza of Mexico, featured long distances between the fences and turns.

Erin Haas, riding North Face Farm’s As Di Chupito, went first in the jump-off and earned second place with four faults in a time of 47.600. Reed went next and jumped clear in 47.640. Third to go was Thaisa Erwin, riding Hollberg Equestrian’s Wild Card, with four faults in 50.367 for third.