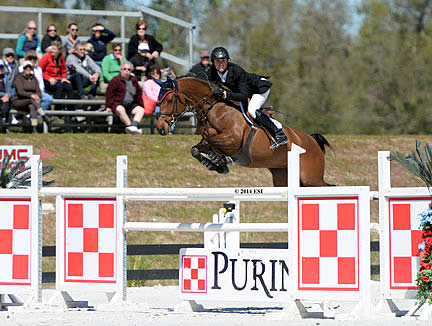 ©ESI Photography. Michael Hughes and Luxina on their way to a win in the $25,000 SmartPak Grand Prix.

OCALA, FL (March 14, 2014) – Michael Hughes is fresh off a win in the FEI Young Riders Nations Cup, where he was one of only two riders to put in a double clear performance. The momentum paid off for Hughes of Allendale, New Jersey who jumped Christina Fried’s Dutch Warmblood mare Luxina to a win in the $25,000 SmartPak Grand Prix, presented by Zoetis.

With a time allowed of 86 seconds, 32 riders attempted to best a technical course presented by grand prix course designer Florencio Hernandez of Mexico City, Mexico. The course consisted of 12 obstacles and 15 jumping efforts with a long gallop from an oxer at fence seven to a vertical-oxer double combination at eight, which proved to be the most difficult line. Only seven horses qualified to return in the jump-off, which was a 10-jump course with four new fences.

The first of seven riders to challenge the jump-off was Lisa Goldman, who already has three grand prix wins this circuit, riding Centurion B for owner and trainer Mary Goldman, of Hawthorn Woods, Illinois. Goldman and Centurion B jumped clean in 43.13 seconds, establishing the Great American Time to Beat, which would eventually put them in fifth place. Next to challenge the course was heavy-hitter Tracy Fenney for MTM Farm of Flower Mound, Texas on MTM Centano. With six grand prix wins already pocketed this season, Fenney bested Goldman’s time and raised the bar by one full second with a time of 42.02 seconds to finish in third place.

It was almost a ‘hat-trick’ for Michael Hughes as he narrowly missed qualifying all three of his Christina Fried-owned rides for the jump-off. With two chances for the win, Hughes returned third in the order with the first of his two mounts, Luxina. With less than two-tenths of a second to spare, Hughes and Luxina took the lead with an all-out gallop over the last two verticals, kicking clear of the timers in 41.80 seconds to take the win.

“Luxina is a very special horse; I have been riding her for three years now and she pretty much handles whatever comes her way,” said Hughes. “I sincerely want to thank Christina Fried, the owner of these great horses.”

Brandie Holloway, professional rider and trainer who is no stranger to grand prix wins herself, was fourth in the irons of Any Given Sunday, for Hays Investment Corporation of Topeka, Kansas. They were fault-free and stopped the timers at 42.05 seconds. The speedster David Beisel of Goshen, Ohio and Equine Holdings, LLC’s Ammeretto jumped clear, and appeared they might have the time, but the timers clicked at 41.87 seconds, just a single one hundredth off the top spot.

“It was really close,” said Hughes. “I had to ride hard with the tight times and in the end there was only three-tenths of a second separating the top three. It’s a great feeling when you see the board, and you think, ‘Wow, we got it’.”

Grand prix action continues this Sunday as HITS IX, the Ocala Celebration, features the $100,000 Sullivan GMC Truck Grand Prix, presented by Zoetis, on Sunday. Next week, all attention will turn to the Great American $1 Million Grand Prix, which debuts as the second jewel in the HITS Triple Crown of Show Jumping Monday, March 24 in the Ocala Horse Properties Stadium.

About SmartPak
SmartPak powers healthy horses and happy riders. The patented SmartPak Supplement Feeding System makes it easy for riders across the country to take the best care of their horses. Founded in 1999, with the purpose of simplifying the administration of nutritional supplements and medications to horses, the system has been adopted by thousands of barns and horse owners across the country, who value knowing that their supplements will be fed correctly. For more information, visit SmartPak.com.