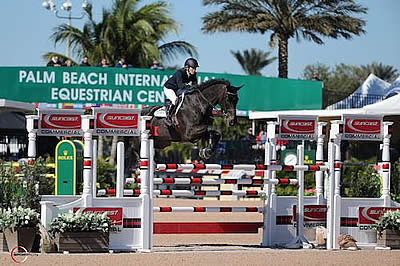 Wellington, FL – January 24, 2016 – The second week of competition at the Winter Equestrian Festival (WEF) concluded on Sunday with young riders taking the spotlight in the International Arena, followed by the $35,000 Suncast® Championship Classic. Meredith Michaels-Beerbaum (GER) and Unbelievable 5, owned by Windward Farm and Jessica Siuda, renewed their winning partnership. Victoria Colvin, 18, jumped to victory in the $25,000 Artisan Farms Under 25 Grand Prix, presented by Equine Couture/TuffRider, aboard Zidane for Springfield Showjumpers. In the hunter ring, McKayla Langmeier rode Quatrain for Laura Critz.

The Winter Equestrian Festival continues on January 27 with a week of CSI 3* competition sponsored by Adequan® and highlighted by the $130,000 Adequan® Grand Prix during “Saturday Night Lights” on January 30.

There were 10 clear rounds out of 54 entries in the $35,000 Suncast® Championship Classic, and they traveled a course designed by Catsy Cruz (MEX). Michaels-Beerbaum and Unbelievable 5, a 15-year-old Dutch Warmblood gelding by Manhattan x Democraat, posted the fastest time of 34 seconds flat. Eric Lamaze (CAN) and Check Picobello Z, owned by Artisan Farms LLC and Torrey Pines, were just behind in the standings when they set the pace in 34.64 seconds. Third place went to Chloe Reid (USA) on Codarco in a time of 34.81 seconds. Ireland’s Cian O’Connor and Sam du Challois, owned by Ronnocco Jump, Ltd. And Jean-Claude Jobin, were fourth in 35.03 seconds, while Amanda Derbyshire (GBR) rode David Gochman’s Cannavaro BH to fifth place in 35.08 seconds.

Michaels-Beerbaum watched Lamaze in the jump-off and saw him leave a stride out from jumps one to two. “I didn’t even try for that; that was too extreme,” she revealed. “I just tried to ride the track how I knew he could do it. I really cut to number three and then I was really short everywhere else. I slowed down a little bit to the last (jump). There was possibly one less stride there that I might have tried had we been in better form together, but it wasn’t necessary in the end.”

Getting back into form was the goal for Michaels-Beerbaum, who explained the Unbelievable 5 is just back into the main ring after a two-year absence due to injury. The pair was successful at top shows in Europe in 2013 before he was sidelined. Last summer, Unbelievable 5 returned to showing locally with another rider, and Michaels-Beerbaum started back with him in the fall.

“This is his first big win, but also (his first) big track again. It took a long time after an almost two year break to get him going again. This is really nice for him that he showed his form again and was as good as ever. It was nice for the owners because they spent a lot of time and had a lot of patience,” she shared. “A lot of people would have given up on the horse and would have thought he wouldn’t make it back, but they really gave it the time and proper veterinary care to bring him back in the sport. This is really quite a nice win for him.”

While it was the first time that Michaels-Beerbaum could push for speed in a jump-off, she felt very comfortable doing so due to her previous relationship with him. “I know the horse very, very well. He had some outstanding results at 1.60m grand prix. I know he’s very, very fast. Until now I’ve only gone slow with him, so this was the first fast round, but I did feel very comfortable knowing him. He’s like an old partner of mine. The speed part wasn’t an issue. But it is the first time he’s gone fast in over two years! It all came together really nicely. He likes going fast. He’s at his most comfortable going fast.”

Michaels-Beerbaum was happy to start out the 2016 WEF circuit with a win. She remarked, “It’s very difficult to win here. If you win anything here, it’s extraordinary. It’s a great way to start. My greatest pleasure is that this great horse that has had a rough go is back in form and back in the sport. It’s really quite nice.”

Victoria Colvin (USA) topped a starting field of 63 to produce the fastest double-clear effort in 43.06 seconds over seven jump-off contenders. Katherine Strauss (USA), 17, who won Saturday’s Artisan Farms U25 Welcome Stake took second aboard her own All In and posted a time of 43.42 seconds. Madison Goetzmann (USA), 15, rode her own Wrigley to round out the top five with a four-fault jump-off round in 41.24 seconds. 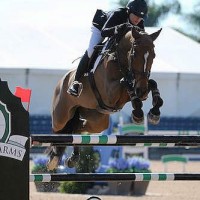 Colvin (left), who has competed in the U25 Grand Prix Series twice in previous years, got the ride on Zidane only a few weeks ago and produced a win in the third class together.

“He’s a joy to ride,” she said. “He jumped fantastic today – he’s like a hunter, which I love. You just let go, squeeze and float around the course. He has a huge stride, so if you ever have a short line, you just leave out.”

Zidane’s stride played to Colvin’s advantage as she approached the last fence of the jump-off, an oxer approaching the in-gate. She was the final rider on course after Strauss produced a quick, clear round right before her.

“I knew Tori was going after me and she’s a very fast rider, but I saw a lot of people have the last one down, so I took my time and Tori didn’t,” said Strauss.

Colvin produced just the right amount of speed from Zidane and stole the win from Strauss with only fractions of a second to spare.

“Yesterday’s win was a confidence boost, but this is a very humbling sport and anything can happen,” continued Strauss. “I just wanted to put myself in a good position for the rest of the Series, and I couldn’t have asked for more from my horse day.”

Top finishers agreed that the tracks set by Course Designer Catsy Cruz of Mexico were a good challenge.

“She really tested the rider’s ability to be within the time allowed, but do the correct number of strides,” said third-place rider Goetzmann. “I think maybe I was a little too eager today and that’s why I had a rail. It’s my first year being eligible for this division, and I was very excited to compete. It’s a great way to develop us younger riders to make the transition into the bigger classes.”

Class sponsors Carlene Ziegler, owner of Artisan Farms, Missy Sage from The Dutta Corp, and Timmy and Laurie Sharma, owners of Equine Couture and TuffRider, were on hand to present winner’s prizes to the top three riders and were honored to watch the future of show jumping compete.

“We are honored to be a part of this transition period for them and it’s a perfect market for us – these are the riders we design and manufacture for,” said Laurie Sharma.

“This is our second year sponsoring this series and while it’s exciting to see returning faces, there are a lot of new riders, which makes it a very dynamic division that’s always changing,” continued Timmy Sharma.

Colvin hopes to continue riding Zidane in U25 competition, which continues with the Team Event during WEF Week 4 in the Global International Ring at The Stadium at PBIEC.

“I want to thank everyone who contributes to this division,” said Colvin. “It’s a great opportunity for young riders, and I’m excited that I have this horse to show in it.”

Presented by The Dutta Corp. in association with Guido Klatte, the Artisan Farms Under 25 Grand Prix Series (AFU25GPS) returns to the Winter Equestrian Festival for its sixth season this year. Throughout the circuit, the series offers a total of $170,000 in prize money while showcasing top young talent in show jumping sport. Open to competitors of all nationalities aged 25 and under, the AFU25GPS is sanctioned by the United States Equestrian Federation (USEF) and the International Equestrian Federation (FEI), giving many riders their first experience competing at the 1.45m level under FEI rules.

The Equestrian Sotheby’s Small Junior Hunter 15 & Under division wrapped up on Sunday morning in the E. R. Mische Grand Hunter Ring with championship honors awarded to McKayla Langmeier, of East Granby, CT, and Quatrain. The pair earned first, second, and two third place ribbons over fences on their way to the division championship. Daisy Farish rode Casares, who is owned by James Lala and Virginia Confer, to the reserve champion honors. Farish and Casares were the victors of Sunday’s stake class. The pair also placed sixth, third, and fourth over fences.

Quatrain is a Westphalian gelding owned by Laura Critz and trained by Jack Towell. Winning the tricolor honors this week was especially exciting for Langmeier because it was her inaugural show with the 12-year-old gelding. While Langmeier had never shown Quatrain before this weekend, she hopes this win secures her the opportunity to show him again in the future. Langmeier has piloted other horses trained by Towell to success in the past, including championships aboard Khaki Run LLC’s horse, Castelli.

“He is really awesome and easy to ride,” Langmeier explained about riding Quatrain. “I had a blast riding him.”

Langmeier especially enjoyed the courses set in the E. R. Mische Grand Hunter Ring on Sunday. “I liked the courses,” Langmeier stated. “They were suited to my horse. He has a big, easy stride and that made the lines easy.”

Langmeier hopes to continue showing Quatrain over the next 10 weeks of competition at the Winter Equestrian Festival. She also aims to secure a spot in the $100,000 WCHR/USHJA Peter Wetherill Palm Beach Hunter Spectacular, which will be held in the International Arena during WEF 6.

The Winter Equestrian Festival continues in its third week on January 27-31. For more information and full results, please visit www.pbiec.com.