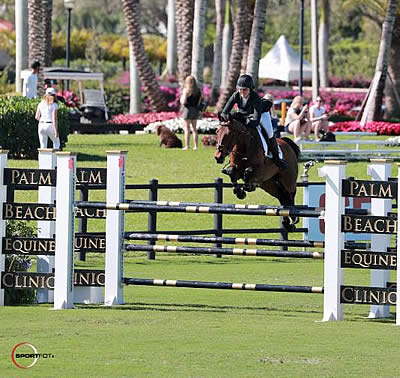 On the grass derby field on Sunday, 50 entries competed over a course designed by Ana Catalina Cruz-Harris (MEX), and ten of those were clear to advance to the jump-off. Lacey Gilbertson (USA) and Seabrook LLC’s Baloppi set the early winning pace in 41.97 seconds with no faults, which would hold up for second place.

Next into the ring for the jump-off was Ailish Cunniffe (USA) on Baloucento 2, owned by Whipstick Farm Ltd. They finished in 42.16 seconds and placed third.

Five trips later, the winning time was lowered to 41.53 seconds when Goetzmann and her own Prestigious finished the jump-off. Three additional rounds were unable to catch Goetzmann’s time and stay clear through the course.

It was the second win in a row for Goetzmann, who also captured Saturday’s $10,000 Hermès U25 Welcome with Prestigious.

A field of 74 competitors took to the International Arena on Sunday in the $5,000 Peggy Cone WCHR Adult Hunter Classic to wrap up the much-anticipated World Championship Rider Hunter week at the 2018 Winter Equestrian Festival. Due to its size, the class featured a California split and pinned two different sections of winners. Tracy Scheriff-Muser, aboard Shoreline, and Samantha Karp, aboard Zentina B, prevailed.

Scheriff-Muser and her veteran mount, Shoreline, topped the field in section A with two top scores of 88 and a total of 176. Scheriff-Muser is no stranger to this particular classic and expressed her enthusiasm to finally walk out of the International Arena with the blue.

Zentina B, guided by Samantha Karp, received the highest score in the division of a 90 in the first round and came back to get an 84 in the second with a total of 174 to secure the section B win.

Stephanie Danhakl of Pacific Palisades, CA topped the $5,000 WCHR Amateur-Owner Hunter 3’3” Classic aboard her own Enough Said and also took second riding her own Quest.

After earning the Adequan Amateur-Owner Hunter 18-35 3’3” division title earlier in the week, Danhakl collected scores of 90 and 84 in the classic to finish on a 174 total with Enough Said. She bested herself by four points after also piloting Quest to scores of 86 and 84 to sit on a total of 170 for second place. Brad Wolf and Libretto rounded out the top three by combining scores of 82 and 85 for an overall score of 167.

Caroline Ratigan and Trust remained unfazed after a scheduling change that moved the junior hunter competitors out of the International Arena and into the E. R. Mische Grand Hunter ring. The pair took two high scores of 87 in both rounds of the World Championship Hunter Rider (WCHR) Junior Hunter Classic 16-17 and emerged victorious.

With a total of 174, the duo was tough to beat. Ratigan and the 10-year-old gelding have been partnered together for three years, and the two continue to best competitors in the hunter ring. Today marked their third consecutive first-place win this week in addition to winning the division championship on Saturday in the International Arena.

Sunday’s final class of the World Champion Hunter Rider week went to one of the last entries to return for their second round in the WCHR Junior Hunter 3’3” 15 & Under Classic, Stephanie Smith and Clintano, owned by Sand Dollar Farm, LLC. The pair had a first round score of 84 and came back to earn an 85. A combined score of 169 was enough for Smith to capture the blue.

Smith, of Saddle River, NJ, and Clintano also won Friday’s section A over fences class in the International Arena with a pair of 83 scores, and the young rider expressed how she entered the competition with continued confidence, despite being moved out of the larger ring due to a scheduling change.

The $25,000 CP National Grand Prix was held on the grass derby field, and it was 20-year-old Victoria Colvin of Loxahatchee, FL who sped to victory on Clochard, owned by Neil Jones Equestrian Inc.

There were 26 entries in the class, and seven in the jump-off. Colvin was the last to go, and she and Clochard, a 10-year-old Belgian Warmblood stallion, raced across the field to clock a time of 40.902 seconds for the win.