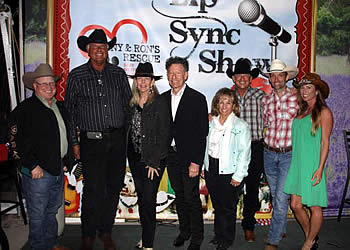 Wellington, FL – February 18, 2014 – It wasn’t your typical dog and pony show at the Sixth Annual Danny & Ron’s Rescue Lip Sync on Sunday, February 16, 2014 at the Palm Beach International Equestrian Center. Four-time Grammy Award-winning artist Lyle Lovett joined in the Rescue Round Up to help raise donations for Danny & Ron’s Rescue, a non-profit dog rescue based in Wellington and Camden, SC. The venue was vibrant with checkered patterns reminiscent of a western dance, while performers were decked out in Stetsons, bolo ties, cowboy boots and an array of country costumes as people from the equestrian community and beyond came together to support their favorite dog rescue.

Over 425 guests made their way into the Special Events Pavilion at the Palm Beach International Equestrian Center on Sunday evening, greeted by several adoptable canine companions looking for their forever home, all of which were adopted. Dressed in country garb, guests enjoyed a fabulous dinner catered by the White Horse Tavern, and enjoyed cocktails and puppy kisses as the anticipation built for the long-awaited lip sync performances.

Moorcroft Stables came out at the top of the ‘Battle of the Barns’ with their lip sync dedicated to the American troops and their canine companions. Their routine was heartfelt and full of emotion as photos of soldiers and dogs flashed across the screens. Their “voices” were heard as they took the first place prize bringing the audience to their feet with a standing ovation.

Danny Robertshaw commented to Charlie Moorcroft, “Not only did your team make a difference for the dogs, but they made a difference to humanity! They opened eyes and hearts. They taught us that while you’re focused on one main cause, you can still remember there are many others out there. They taught the spirit of teamwork, about being grateful while remaining humble, and showed us how to have fun while working hard and giving at the same time. We are blessed!”

Kim Kolloff, ‘Sheriff’ of this year’s Rescue Round Up, started the Lip Sync six years ago to foster a sense of philanthropy and altruism in the children, providing a kid-friendly event that is truly one-of-a-kind.

“Through the six years this event has really grown, and the children have really learned about giving back. Their hearts have opened up so much to the dogs, and they understand what it means to save money to rescue homeless, abused, starving and neglected dogs,” Kolloff said. “Each child has become so close to the rescue that their passion is seen in every action they take. They work to make everyone aware the meaning of giving back to the dogs.”

Each one of the performances was over the top, and showed deep appreciation for everything that Danny & Ron’s Rescue does, so much so that Lovett recommended that each child be named a winner.

“Gosh, the children all tried so hard. They put their hearts into every performance. You could tell that it was important to them. As I watched them, I thought that it was more about the spirit in which they performed, rather than the performances themselves. I actually did think that they all did a great job. It was unnecessary to pick one over the other.”

Lovett continued, “One thing about art and music is that it isn’t a competitive sport; you can simply just like things you like, and not rate one over another. I think in the case of these children, who worked so hard and invested themselves in these performances, I couldn’t choose one over another. I loved seeing their faces. I got snapshots of each performance on my phone, and I can’t wait to download them and share them with everyone.”

During the mid-point of the performances, the lip sync came to an intermission as the explanation of the fundraising was brought to the audience’s attention. With each dog averaging a cost of $500, guests pledged money to help with the veterinary expenses associated with each pooch. In previous years, the event was able to raise enough donations for a mobile adoption unit, as well as improvements to their rescue facility.

The judges for the event included: Dr. Betsee Parker, Ryan Beckett, Colleen McQuay and Lyle Lovett. Dr. Betsee Parker personally donated $52,000 to Danny & Ron’s Rescue, on behalf of her horse, Ovation, who won his second consecutive Hunter Spectacular the night prior with Tori Colvins in the irons. It was Lovett’s first visit to Wellington, and his first time as a celebrity judge for the event. It was through Danny and Ron’s connections with Colleen and Tim McQuay that Lovett learned of their rescue, and donated his time.

“I learned about Danny & Ron’s Rescue through Tim and Colleen, who I ride reiners with,” Lovett explained. “As I learned about what they [Danny Robertshaw and Ron Danta] do – their dedication and their spirit is infectious. The more I learned about them, the more eager I became to meet them. Coming here this weekend was an incredible experience, and although I have played concerts in the areas over the years, I had never made the trip to Wellington. To see how well supported Danny & Ron’s Rescue is by the community and the folks here who support horses. When you see good hearted people come together to accomplish something good, that really makes you want to go into the world and try to be better.”

Ron Danta concluded, “Danny and I were so moved Sunday night by all of the love and support of all of the performers, and all of the people that came to support the Lip Sync. I think it was so evident by looking at the emotions on all of the children’s faces during their performances, and even in the photos, just how much this all meant to them; their support brought tears to our eyes.”

Through the efforts of the kids, parents and supporters, Danny and Ron’s Rescue was able to make history at the Sixth Annual Lip Sync. The event was a huge success with nine dogs adopted and crucial funds raised for the organization. The event would not have been possible without the sponsorship support of Goshen Hill, H’nD Farm, and Dever Golf Carts. For more information on Danny and Ron’s Rescue, please visit www.dannyandronsrescue.org.