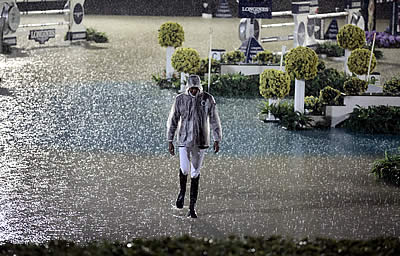 Barcelona (ESP), 23 September 2016 – The second competition in the Furusiyya FEI Nations Cup™ Jumping Final, the Longines Challenge Cup for teams placed ninth to 18th after Thursday’s opening round at the Real Club de Polo in Barcelona (ESP), was cancelled due to adverse weather conditions.

A major thunderstorm and torrential rain made conditions impossible and, with the safety of horses and riders as the top priority, the decision was made to call off the competition.

The President of the Ground Jury, Technical Delegate and President of the Veterinary Commission, in consultation with the Organiser, agreed unanimously on the cancellation. In accordance with the preamble* of the Furusiyya FEI Nations Cup™ Jumping Rules, the FEI Jumping Committee was also consulted on the decision and was in full agreement.

In line with the series rules, Spain will jump in Division 1 next season as they were placed 12th in Thursday’s first competition. Austria, which finished 13th in the first competition in Barcelona, will remain in Division 2 for the 2017 season. The Austrian and Spanish chefs d’equipe were informed of the decision by the FEI.

Subject to weather conditions, the Organising Committee is planning to maintain the full programme of events for 24 September.

Under Article 109.12 of the FEI General Regulations: “Subject to the unanimous agreement of the President of the Ground Jury, Technical Delegate and President of the Veterinary Commission in consultation with the Organiser, a Competition (either before or during) can be postponed and/or cancelled, not only due to force majeure, catastrophic occurrences, extreme weather conditions but also for non-compliance with FEI Rules and in specific situations where the welfare or safety of the Horses, Athletes, Officials or the public is compromised.”

* The preamble of the Furusiyya FEI Nations Cup™ Jumping Rules states: “These Rules must be read in conjunction with the FEI Statutes, the FEI General Regulations (GRs), the FEI Jumping Rules (JRs), and all other relevant FEI rules and regulations. In any unforeseen or exceptional circumstance which is not addressed by these Rules, it is the duty of the FEI Jumping Committee to interpret them and render a Decision in a manner compatible to the fullest extent possible with the other provisions of these Rules, the GRs and any other applicable rules of the FEI, as well as sporting spirit.”