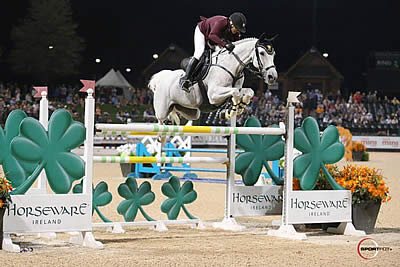 “He was really on fire in the first round,” Little said of the 2007 Holsteiner gelding (Clearway x Come On) owned by Karen O’Connor. “He was very aggressive. He had a very fast class on Thursday, and as I said, I’ve just got him really strong and really fit coming in here and he was on fire tonight. He loves showing at night and he is a great night horse. He felt the energy and was totally amped when he walked in there, so I had a lot of horse on my hands.”

Little continued, “It made it a little hard going into the jump-off, but I knew that I could just have a nice easy clear and still slip ahead because he’s such a fast horse, but if I had done that, Clearwater would’ve known something was up, so I just came to the first jump like I always do, let him find it and turn him loose, and he was like ‘Okay I got this.’ He was easier to ride through the jump-off.”

Thirty entries toured the course designed by Alan Wade (IRL), with four horse-and-rider pairs returning to fly around the short track. Little complimented Wade’s building, emphasizing his attention to detail and evaluation of the field.

“This week is a huge victory for me because I haven’t seemed to have so much luck with and I’ve really had to learn how to ride Alan Wade’s courses. They’ve always been a real learning experience and this week the courses were definitely challenging, but I loved them,” she said. “I don’t have anything bad to say about them. I think they were very technical. In this ring, the footing is fantastic, the lighting is excellent and the jumps are beautifully presented, but being square, it can become difficult if they build into the corners.

“Alan is such a ring craftsman. He knows exactly how he’s using the ring in addition to how he’s using his course,” Little continued. “His courses are always a little deceptively tricky. We watched the first few and everybody thought he under built, but you always just have to sit there and wait because the more you study them, the more it’s like ‘Oh my gosh. There’s a lot to this.’ It’s wonderful when there isn’t just one difficult spot; the rails really came for people all over the course.”

Following her win in the $35,000 1.50m Welcome Stake on Thursday, Little credited Clearwater’s technical skill for their success and said that the same talent helped them prevail. “As I said the other day, my horse is really great at the technical aspect of things and he was just on this week and fresh and ready to go. What a fun week it was with him!”

After a busy winter circuit in Florida, Little is keeping things light with Clearwater and choosing shows that suit him best. “We did a lot during Florida and I just had an unlucky winter circuit. I won a couple in the beginning and then I just decided that I needed to go home, re-group, train a little bit, let him get fresh and start over again. I think we’re just going to keep going and I’m going to show him when he feels like he’s really peaking, not just show because there’s a show I want to go to and we’ll play it by ear.”

Little, a multi-discipline athlete who is also preparing for September’s FEI World Equestrian Games™ Tryon 2018 as a member of the Land Rover US Eventing Team, revealed that continuing Clearwater’s jumping career is critical to her preparation. “I only have one eventing horse, so this is really how I stay sharp and all of my horses are my support team for the Eventing as well. I have to keep going with him and I need him, but I’m starting to find the balance for what’s right for him and it’s really paying off.”