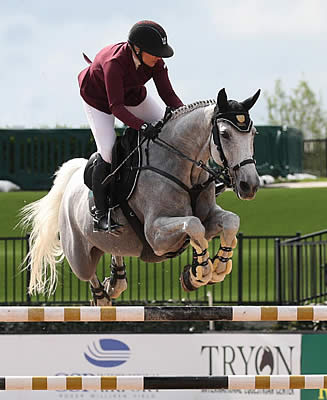 A total of 39 entries contested the first-round track set by Alan Wade (IRL), with seven pairs welcomed back for the short test. After watching both Parot and Vale’s performances, Little and the 2007 Holsteiner gelding (Clearway x Come On) put in a quick and clean round that could not be beat.

“It’s always exciting to ride one of Alan’s courses,” said Little of the competitive class. “He does an incredible job and they’re always extremely technical and challenging. I think he usually evaluates the field that he has very well. Today’s was a well-planned course and there were not too many clear. It’s a step up for the 3* week, which was nice and it was a lot of fun.”

Little further elaborated about the course’s technical nature, which plays to Clearwater’s strengths. “There was a center line that was quite difficult – [Wade] included three doubles today and he does that somewhat regularly. It really allows the course to be even more technical. The doubles really caught a lot of people out, but my horse is very technically able. He’s really easy to ride and when I see those kinds of lines in a course, it’s definitely to his advantage,” she explained. “He’s a very quick horse in the jump-off.”

“I knew that with that group of people, whether some had rails or not, I’d have to put in a personal best to win,” Little described, noting the day’s stiff competition. “Clearwater is very fast, and he was really excited to be here, too, since it’s his first week here this summer. He’s had a lot of good rounds in this ring, so we’re looking forward to Saturday’s [Grand Prix].”

Little has been keeping things light with Clearwater in the Jumping discipline while she focuses on preparing her FEI World Equestrian Games™ (WEG) mount, RF Scandalous, after the duo was recently being named to the Land Rover USA Eventing Team Short List for the event.

“I was last here for The Fork. But recently, I took Clearwater to Upperville in June and then to a small national show to give him an easy round. He won that and so we haven’t been doing a ton, but I’m just trying to choose well-planned, well-timed shows and not push it leading up to September.”

In addition to preparing and maintaining her horses, Little is also still mindful of an older, but serious foot injury and has recently completed a six-month stint in a boot, she added. “It’s pretty good. I expected by now to have had surgery. I did spend six months in the boot, which had I known I was going to be in it for that long I would have tried something different, but in the end, it really let it heal. I won’t say it feels normal now, but it’s certainly manageable and I don’t notice it when I’m riding.”

Earlier in the week, the $5,000 1.40m Power & Speed Stake CSI 3* congratulated Javier Fernandez (MEX) and End Good All Good, a 2009 Dutch Warmblood gelding (Mr. Blue x Caretino) for their victory, stopping the short-course timers in 29.316 seconds to best the field of 32.