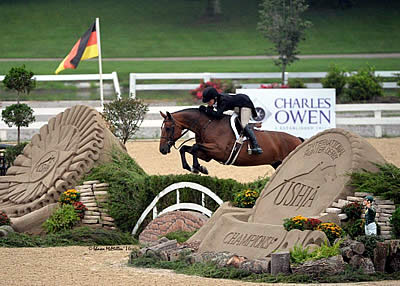 Lexington, Ky. – August 19, 2016 – Out of 66 entries in the first classic round of the USHJA International Hunter Derby at the Bluegrass Festival Horse Show, Kelley Farmer had four of the rides. Not only did the hunter derby veteran qualify two of her mounts, Baltimore and Kodachrome, for Saturday’s handy round, but she also took first and second place honors for Lane Change Farm.

Baltimore, owned by Jane Gaston, was the first ride of the day for Farmer. She took the 11-year-old Oldenburg around the course, designed by Danny Moore and Bobby Murphy, to earn scores of 92, 95, and 92 for a total of 291 points going into Saturday’s handy round. Farmer also chose to jump all four high-options. Contrary to the USHJA Pre-Green Incentive Championship, where the top 30 qualified horses go into the final round with a clean slate, the classic points will carry over to merge with Saturday’s handy round score.

Although Farmer had three other rides left, she was able to maintain her first place position with Baltimore throughout the entire class. As much as the other riders tried, Farmer’s near-perfect scores could not be beat as the class continued. Since she got the ride on the bay gelding by Balou du Rouet, Kelley has also earned many titles and championships in the Regular Conformation Hunters and High Performance Working Hunters.

Kelley did not let the thought of going early on in the class take away from her concentration.

“He was amazing. He was unbelievable. He went first last week in Saugerties and I sort of was glad to get it over with,” Farmer said. “It was a little nerve wracking that I had to do him first, but he was unbelievable. I mean, he tried so hard and he’s so brave. He can jump so much, so I never worry about what they build.”

Larry Glefke of Lane Change Farm added, “I never say this, but it was flawless. Because usually, I have a lot to say when she comes out of the ring. Flawless.”

Friday was bittersweet for Farmer, because her usual winning derby mount, Mindful, is currently out of commission. However, Farmer was happy as he is set to get back to work at the beginning of next week.

“It is what it is, but he’ll be back for Florida,” Farmer said about her longtime partner. “He’s been a great horse for me and I’ll be excited to have him back.”

Coming in second place during Friday’s classic round was Farmer and Kodachrome, owned by Nina Moore. Although Farmer has not had the ride on him for very long, the pair still laid down a beautiful trip to earn the red ribbon and a grand total of 280 points.

Trainer Larry Glefke was also extremely pleased with Kodachrome’s performance, saying, “He fits in with Mindful and Baltimore. He has that kind of ability to pop at the jumps. He has a freaky jump, and it gets bigger every week because he’s getting stronger. Both of those horses have quality; [Miss] Lucy has the same quality.”

He continued, “They walk to the jumps every day and they don’t want to knock them down. I mean, things go wrong, things can happen, but they make an effort to jump the jumps every day. You never have to ask them to do too much. Their sincerity is to jump this high over everything.”

Kristy Herrera had the ride on Helen Lenahan’s Miss Lucy, who is normally Jennifer Alfano’s mount, and took third place in the classic round. Alfano is currently injured from a fall that occurred at the Devon Horse Show, so she entrusted her longtime friend, Herrera, to take the reins for her. Herrera only had one other show under her belt with Miss Lucy, so she was a little nervous going into Friday’s classic round on the “quirky” mare.

According to Alfano, “She has a little bit of a funny canter, and she doesn’t really like you to touch the reins.”

“It’s Lucy’s way or no way. I was the one that needed to adjust to her,” Herrera said with a laugh. “She has her own way of going and it is different from a lot of other horses I’ve ridden, but she’s so incredibly athletic and smart that once you get it, you don’t have to do anything else.”

She continued, “I was nervous about it, but she walks in that ring and puts her ears forward and gives you the confidence that you can jump anything. It was awesome.”

While Alfano was a little sad that it was not her in the irons aboard Miss Lucy, she was very proud of Kristy and Miss Lucy’s trip that received a combined total of 276.5 points.

“I couldn’t be more thrilled. I was so nervous, I thought I might have a heart attack. I mean, I’m not going to lie, I woke up this morning and I was a little sad and feeling sorry for myself. Watching her go around, it made me teary eyed. That was a hard thing she did today,” Alfano said.

“And I don’t think if anyone else was standing on the ground, I could have walked in there on a horse like that,” Herrera said.

Alfano said that her efforts were a result of trust and friendship built over many years. Alfano had faith in Herrera to take the ride on Miss Lucy, and Herrera trusted Alfano to instruct her as to how best ride the mare.

“I think what made it easier was that we have such a long-standing relationship. We’ve been together since she was 9 years old,” Alfano said. “She may not know the horse, but she and I are so in sync. Lucy is a little different. Kristy has the faith in me to say, ‘Okay, if that’s what you say to do, then that’s what I’m going to do. I’ll take your word for it and do it.’ I could not be any more proud of either one of them.”

Thirty horses and riders have qualified to compete in Saturday’s handy round, which will take place at 6:30 p.m. in the Rolex Stadium. Keep your eyes out for Kelley Farmer and her two horses, as well as Kristy Herrera and Miss Lucy.

After winning the 1.40m Open Jumpers on Thursday, Aaron Vale was looking to continue his winning streak under the lights on Friday night. The Ocala-based professional and Finou 4 did just that, stealing the win from Shane Sweetnam and Cobolt in the $25,000 Hagyard Lexington Classic at the Bluegrass Festival Horse Show.

“This was a great class,” Vale said. “It was good fun, and I’m glad I came out on the long end of the stick. It ended up being an entertaining class. You get a little flavor this week with the jumps for [USHJA International Hunter] Derby Finals. The horses are so used to jumping stripes, so tonight we got more of a natural tone to some of the obstacles, so that was a fun thing.”

Bobby Murphy’s first-round course produced a 16-horse lineup for the jump-off, with Sweetnam and the Blue Buckle Group LLC’s Cobolt going double clear and setting the early lead with a time of 36.909 seconds.

Vale re-entered the ring aboard Thinkslikeahorse and Don Stewart’s Finou 4, and used his horse’s massive stride to his advantage, cutting his turns and tripping the timers in a blazing fast 33.035 seconds.

“Each horse you have to ride to their strengths, you know,” Vale said. “Finou has a big enough stride that I can leave a stride out, even in a forward line. It’s a strength of his, covering ground.”

Two more challengers came close to Vale’s time. Sharn Wordley and the Sky Group’s Famoso D Ive Z were the first to come within seconds of the lead, clocking a time of 35.84 seconds to eventually finish in third, bumping Sweetnam down to finish in fourth.

Going second-to-last in the order was Benjamin Meredith and Shader Sporthorses LLC’s Anabelle 28. Meredith and Anabelle finished strongly in second place after stopping the clock in 34.022 seconds – just fractions of a second behind Vale, whose time proved unbeatable.

“I didn’t see Aaron go, but for sure I was going to try to beat him,” Meredith said. “The only place I could have gotten ahead of him was the first line. I jumped the first jump, and I landed and said there’s no way I can leave a stride out. But the rest of the course Anabelle kept up with him. We tried to win again, but we just couldn’t get there.”

Vale said he began riding Finou 4 about a year ago. Surprisingly, the gelding is blind in his left eye. Vale said that Finou 4 is instinctively very protective of his body, and will swing himself around worriedly to be able to see.

“He’s a little difficult to train because he’s working against his instinct and he’s worried,” Vale explained. “When he has a good day he usually wins. He’s got enough stride, he has a lot of ability, and he can be really fast in the jump-off. When I have his brain right, he gives me a great class. There were a few things I was worried about for him tonight, but he handled it all.”

Making his victory even sweeter, Vale has reclaimed the top spot from Pablo Barrios in the Hagyard Challenge Series standings, moving one step closer to earning the leading rider bonus.

“We’re all chasing the $50,000 bonus,” Vale laughed. “I’ve got a wedding next week, so I’m missing that class. I know Pablo was at the Olympics this week, so he missed this one. You’re not supposed to count points. You’re supposed focus on riding your horse in the class, so it’s just an added pressure. For people like me it makes a difference, so thankfully we got it done tonight. Hopefully we can come out on the right end of the bonus, because it’s a great thing for Hagyard to do and Kentucky to put it on. We love coming here.”

The title sponsor, Hagyard Equine Medical Institute, is one of the oldest and largest equine veterinary practices in the world. Founded in 1876, the institute offers a staff with qualifications unparalleled by any single non-university veterinary group in the equine industry. Hagyard veterinarians have dedicated themselves to the health and well-being of the horse.