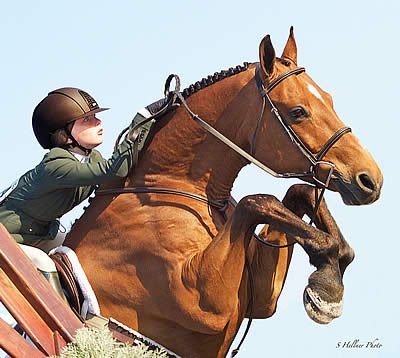 Wellington, FL (April 17, 2018) – Pony power has always been Kat Fuqua’s forte, and 2018 marks a milestone in her show career as she elevates to Junior Hunter success in addition to multiple pony and hunter titles. From her hometown of Atlanta to the sunny hunter rings of Wellington, Fuqua’s consistent top placings aboard her equine partners between January and March of 2018 have set the tone for another successful year of competition. Going into a busy spring and summer show season, her excellence in the arena has earned some of the top USEF, USHJA, and circuit pony and hunter rankings in the nation. But while this 10-year-old’s love for her horses translates to ribbons in the ring, for Fuqua the pleasure is all in just being in the saddle.

Fuqua began her year at the Atlanta Winter Classic, spending three weeks enjoying her hometown competition before heading to jump with the top hunter riders in her divisions during WEF 6’s World Hunter Week. Her small pony, Goldhill’s Arresting Charm, and medium pony, Finesse RF, both swept all three weeks in Georgia, topping out as Champions of their divisions. Fuqua’s large pony, Chic in Time, was champion twice, as was her Junior Hunter RS Levitation in both of the two weeks he was shown in the Under 15 Small Junior Hunters. After a week of traveling and a brief respite from showing, Fuqua and horses hit the ground running during World Hunter Week.

Finesse RF immediately showcased some of the savvy she’s named for right out of the gate, finishing as Reserve Champion during Hunter Week and was also Reserve Champion in the $5,000 USHJA National Pony Derby in March. Goldhill’s Arresting Charm finished third in the first round of the Pony Derby behind Finesse. Thrilled with both of the pony’s performances, Fuqua noted that Finesse, known around the barn as Ladybug, shone in their first ever competition together at WEF.

Fuqua’s final Winter Equestrian Festival placings with her ponies include 5th place in the Overall Circuit rankings with Chic In Time in addition to Champion and Reserve placings, and 4th overall Circuit Pony Rider despite only 7 weeks of competition during WEF 2018. During those seven weeks, Fuqua and her ponies were consistently placed in the ribbons, with the competitive classes consisting of 20-30 of the top pony riders in the nation.

In the USEF’s national rankings, as of April 13, Fuqua and her ponies rank as follows: 5th in the Small Pony Hunter with Goldhill’s Arresting Charm, 2nd in the Medium Pony Hunter with Finesse RF, and 2nd in the Large Pony Hunter with Chic In Time. Fuqua won the USEF 2017 Champion Leading Pony Hunter Owner and is currently ranked second in the USEF’s 2018 Pony Hunter Owner standings as of April 13. She is also ranked as the top Pony Hunter Derby rider in the nation by the USHJA, and stands as the leading rider of the division since its inception in 2017. In the USHJA’s National Pony Hunter Derby Horse rankings, Finesse RF is currently sitting in second and Goldhill’s Arresting Charm is sixth. Finesse and Chic are also ranked second and fifth in the Grand Champion Pony division, which accounts for all pony sizes.

While the ponies have always been a passion in Fuqua’s life, it is her success with her new Junior Hunter mount, RS Levitation, that is setting the foundation and capturing her imagination for future equestrian endeavors. After just three months showing in 3’6″ Junior Hunters, the pair made their Wellington debut during WEF 6. Just a year ago, in February 2017, Fuqua and High Noon 3E were Champion multiple times in the Children’s, and finished as the Circuit Champion 11 & Under at WEF 2017. With barely a year elapsed between her Children’s championships and Junior Hunter debut, Fuqua’s poise and passion in the arena continues to prove exceptional as she climbs the divisions. She and Levitation, known as Jett around the barn, floated elegantly over the spectacular hunter obstacles in Palm Beach International Equestrian Center’s International Arena. Having competed in her first WEF competition ever four seasons ago at 6 years old, Fuqua noted that much of her 2018 success in the Junior Hunters is based on Jett: “He is one of a kind because he takes care of me and gives me confidence,” said Fuqua. “He jumps big and wants to win.” They currently stand tenth overall in the USEF’s Small Junior Hunter Under 15 ranking as of April 13.

The USHJA also currently ranks Fuqua and all four of her actively competing equines #1 in the Zone 4 Horse of the Year standings for the Junior Hunters, Pony Hunter Small, Pony Hunter Medium, and Pony Hunter Large divisions. In the USHJA Zone 4 Pony Hunter Derby standings, Fuqua is on top with Finesse RF and third with Goldhill’s Arresting Charm.

Kat Fuqua’s passion for horses is reflected not only in her highly decorated Pony Hunter and Junior Hunter rider results, but also in the joy and dedication she shows each time she swings into the saddle. Based out of Atlanta, Georgia and under the guidance of trainer Michael Newman of Aubrey Hill Farm in Pensacola, Florida, every aspect of Fuqua’s riding, training, and show career reflects a unique ardor for equines and horse sport. She balances her equestrian lifestyle with attendance as a full time 4th grade student and takes pride in developing alongside her horses.

For more information on Kat Fuqua (pronounced foo-quay), visit her website at www.KatFuqua.com.