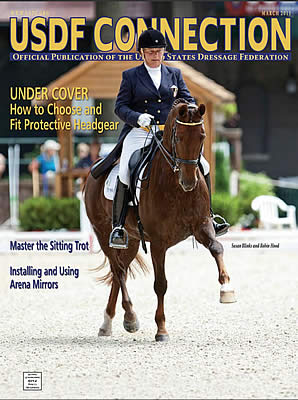 Bred by T. van den Berg in The Netherlands, the liver chestnut gelding affectionately called Robbie was originally owned by Eugene and Annebeth Reesink-Brouwer. Sired by Jazz, Robin Hood (Jazz-Lionne, Zep) earned a 9.5 for his rideability in the 5-Year-Old Finals of the Pavo Cup, and ultimately reigned supreme over the 2003 Reserve World Champion Hilltop Rousseau.

“Robbie was owned by very good friends of mine and their original plan was for him to be ridden by Annebeth,” Blinks explained. “I would help her train him while I was based in Europe for the summers competing with Flim Flam. He was exceptionally talented and we discussed that when he needed the next step in his training, I would pick up the ride on him to develop him into a Grand Prix horse.”

Following his success at the Pavo Cup with Judith Ribbels, Blinks formed a partnership with Louise and Doug Leatherdale to purchase the gelding. In the summer of 2004, Robin Hood was imported into the U.S. as a 6-year-old to further his development with Blinks.

“He was by far the smartest horse I ever trained and he learned new concepts really quickly,” Blinks recalled. “He had a hot athleticism paired with a really can-do attitude. He never passed judgment and always seemed to say “OK! Let’s go!” in a total fulfillment of what he believed he was asked to do. I was very lucky.”

Though he was quite reactive and sensitive to his environment, Robin Hood made his international Grand Prix debut as a 9-year-old at the CDI-W in Pebble Beach, California.

“He always performed with a great sense of humor – I had so much respect for his character,” she said. “He didn’t have a weak link but piaffe and passage were his favorite and he could perform super pirouettes. He was so expressive and cat-like – he was able to extend and collect with such ease.”

When looking back at her career with Robin Hood, the show with the fondest memories together was a CDI3* in Del Mar, California. Though the pair’s top three result happened to be a favorable outcome, Robin Hood’s quintessential antics in the ring is what made Blinks smile.

“A mother is overly proud and positive of their horse, but he was quirky and sometimes unreliable in the ring. While many judges rewarded his expression and enjoyed how his character came out in his work, others felt he was tense and unconcentrated,” Blinks explained. “At the Del Mar show, our Grand Prix Special was quite good, but when we were walking toward the transition to piaffe on the centerline he squealed as he picked up a beautiful piaffe. I remember Stephen Clarke was the judge at C and he laughed and was so positive about it. Robbie brought such joy to his work – I loved that quality about him and it kept me on my toes.”

Together, Blinks and Robin Hood racked up quite a few top Grand Prix placings and wins in CDI Grand Prix classes in California, Quebec, and Ontario. Blinks also campaigned the gelding in Germany and Luxembourg and qualified for the U.S. Festival of Champions and Olympic selection trials in Gladstone, New Jersey.

“He was such a partner and he was so giving with his energy and work ethic, more so than any other horse I’d ridden,” she said. “I really felt like I was walking around the world with the best partner and we did it together. That is very special. For me, that was a very joyful way to ride.”

Though he was aloof around other horses, he begged for attention for his rider and caretakers, enjoying baths and his grooming sessions. “I cherish the moments I would sit outside the door of his stall with his door open while he’d supervise my rolling of polo wraps – we were simply enjoying our time together in the barn,” Blinks said fondly.

Blinks and Robin Hood rode down centerline for the last time together in 2013, but the special gelding had more in store to become a much-loved schoolmaster to Molly O’Brien, an FEI Junior and Young Rider in Blinks’ program.

“He loved his job right up until the end and he was a generous teacher!” Blinks said. “Molly is a talented rider who started working for me and has enjoyed the opportunity to ride Robbie for three years. She was able to learn and get experience riding all the Grand Prix movements. She was his ‘little girl’!”

A significant influence on Blinks, Robin Hood and her partnership with Leatherdale Farms afforded her opportunities to expand her international Grand Prix career.

“The Leatherdales were so supportive of my time with Robbie and there is not another owner in the world like Louise,” she concluded. “She trusted my decisions on what I thought was right for the horse and she always wanted to provide the best care for Robbie.”

“In the peak of his career, when we were flying to Europe for Nations Cups and flying to Canada for Olympic selection points and also Gladstone for the selection trials of the 2010 World Equestrian Games and 2012 Olympic Games, I couldn’t afford to do those things without the Leatherdales. I think he flew 23 times in his life! Even in his retirement, Louise was incredible in supporting his care in the manner he deserved. I will forever be grateful and I know Robbie was too!”