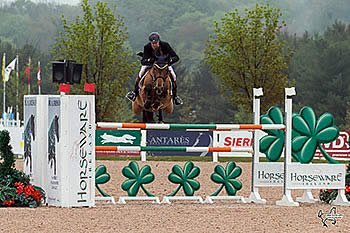 Caledon, Ontario – Ten-time Canadian Olympian Ian Millar of Perth, ON opened the Canadian international show jumping season with a win in the $50,000 CSI2* Jumper Classic, presented by Horseware, on Sunday, May 21, during the CSI2* Caledon National in Caledon, ON.

The clear rounds just kept coming for Millar and Dixson throughout the five-day CSI2* Caledon National tournament.  Having jumped double-clear in Friday’s $35,000 CSI2* Open Welcome for a fifth-place finish, the pair turned up the heat in Sunday’s Jumper Classic.  With the advantage of being the final challenger in an eight-horse jump-off, Millar knew exactly what he had to do to catch the leading time of 34.82 seconds set by Ireland’s Conor Swail and Flower, a new acquisition owned in partnership with Canada’s Vanessa Mannix.  With decades of experience under his belt, Millar sliced and diced his way around the jump-off track, meeting every distance with trademark precision.  As he cleared the final obstacle and galloped through the timers, the new winning time of 34.09 seconds flashed on the scoreboard.

“Conor pushed me really hard; he was fast, but Dixson was right on his game!” said Millar, 70, of the 14-year-old Belgian Warmblood gelding (Vigo d’Arsouilles x Olisco) owned by Susan and Ariel Grange of Cheltenham, ON.  “There was a turn to the pair of verticals where we happened to catch the correct distance and shaved the time off.  I know Dixson well, and he knows me, too.  He knows what I’m about to do it almost before I know I’m going to do it.  We’re like a married couple.”

Millar and Dixson celebrated their victory in the same arena where they had helped Canada claim the Team Gold medal two years earlier during the 2015 Pan American Games.  As the host of equestrian events, the Caledon Equestrian Park now serves as an important legacy to horse sport.

“Dixson is starting his Canadian season here at the Caledon Equestrian Park,” said Millar, who spent the winter competing at the 12-week Winter Equestrian Festival in Wellington, FL.  “He’ll enjoy a rest next week, and then we’re off to Langley, BC, where he’s on the Nations’ Cup team for Canada.  Then it’s over the mountains to Spruce Meadows for the summer series.”

Millar had two shots at victory in the $50,000 CSI2* Jumper Classic, as he also qualified Vittorio 8 for the tie-breaker by jumping clear over the first-round track set by two-time Olympic course designer Leopoldo Palacios of Venezuela.  Millar has been riding Vittorio 8 for owner Future Adventures for the past year, and the pair was double clear in a time of 36.25 seconds to finish in fifth position.

“I’m looking forward to seeing what the Spruce Meadows tour will do for him,” said Millar of the nine-year-old Hanoverian gelding (Valentino DDH x Ramiro’s Bube).  “He has the technique, power – he’s careful, modern.  He would be a Games horse.  He’s just nine now and if he takes the next step over the next year, he is there.”

While Millar dominated Sunday’s proceedings followed closely by Swail, another Irishman settled for third.  Daniel Coyle, who is 22 years of age, guided Cita, an 11-year-old Holsteiner mare (Casall x Pik Ramiro) to a third place finish for owners Susan and Ariel Grange, giving the mother-and-daughter team both the win as well as a third place finish.  Erynn Ballard of Tottenham, ON took fourth place following a clear jump-off performance in a time of 35.24 seconds riding Carimba B, a nine-year-old Hanoverian mare (Contendro I x For Pleasure) owned by her family’s Looking Back Farm.

While Swail may have settled for second in Sunday’s $50,000 Jumper Classic, it was he who stood alone in the winner’s circle following Friday’s $35,000 CSI2* Open Welcome.  The times were close but, in the end, Swail’s time of 39.49 seconds gave him the edge over Coyle, who had stopped the clock in 39.62 riding Cita.

Canadians filled the next three spots in the placings with Keean White of Rockwood, ON turning in a time of 41.10 to take third with Carrera v/h Westleven Z, Canadian Olympian Beth Underhill of Schomberg, ON placing fourth with a time of 41.47 riding Count Me In, and Millar and Dixson rounding out the top five with a time of 42.30 seconds.

For more information on the CSI2* Caledon National, including full results, as well as a full competition schedule, please visit www.caledonequestrianpark.com.