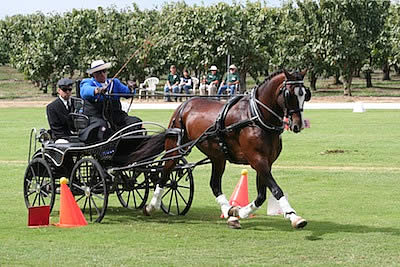 Thousand Oaks, CA – June 27, 2013 – Horse Radio Network’s once-a-month Para-Equestrian Show featured both Para-Dressage and Para-Driving on Thursday, June 27. Lindsay McCall from the USPEA co-hosted the show with Para-Equestrian Driver Diane Kastama. Evin Rattner, who helped run the 2012 U.S. Paralympic Selection Trials and has worked multiple Para-Dressage shows, spoke with Kastama and McCall about his experiences with Para-Dressage and what we may expect in the future.  Internationally known driver Keady Cadwell visited the show to talk about the 2012 Para-Equestrian Driving World Championships. Cadwell was the Chef d’Equipe for the U.S. Team and has been working with the Para-Drivers since 1998. To view episode #213, visit http://dressageradio.horseradionetwork.com/2013/06/27/dressage-radio-episode-213-para-week-goes-driving/.

Co-Host Diane Kastama of Arroyo Grande, CA:  In 1991 a car crash left Kastama paralyzed from the waist down. Although a lifelong horse person and dressage enthusiast, riding without the use of her legs was not much fun and she soon turned to driven dressage and then the exciting sport of combined driving. Her relatives and friends thought she was crazy for taking on a sport that involves sitting atop a tall carriage, pulled by a horse going “hell-bent” for speed.

Kastama, Grade I, started competing with her home bred Appaloosas but now Diane competes with a pair of Section D Welsh Cobs, Rupert and George. She drives them single, pair and tandem. She competes against able-bodied drivers all over the Western United States and occasionally on the East Coast at the Intermediate and Advanced level. Kastama has also demonstrated her skills at Rolex, KY, Horse Expo in Sacramento, the “Night of the Horse” in Del Mar, and the Equine Affair and various therapeutic horse programs throughout California. She has also participated in the closing ceremonies at the 2006 World Equestrian Games in Aachen, Germany. Kastama is always willing to share her skills and knowledge and bring driving to the forefront of equine sports.  Diane has been very successful in international Para-Equestrian competition, coming home with an Individual Silver and Team Bronze driving a borrowed Welsh Cob Stallion in 2002 Greven, Germany.  In 2004 she place 5th with a borrowed Welsh cob in Edinburg, Scotland.  In 2006 she came home with Individual Gold driving her own Welsh cob gelding Jasper.  In 2008 Kastama and Jasper earned Individual Bronze and Team Silver.

When she is isn’t competing or driving, Kastama is very involved with the United States Driving for the Disabled (USDFD) organization which helps to foster and grow the sport of Para-Driving. To learn more about the USDFD, please go to www.usdfd.org or contact President Bev White at usdfdpresident@gmail.com.

Guest Evin Rattner: Evin Rattner is the Strategic Officer for DevonWood Equestrian Centre in Sherwood, Oregon. He’s responsible for the company’s technical development, including network operations and show services. Evin is also co-director of DevonWood Competition Services, the show management and scoring service that is a product of the facility’s premium show services group that started in 2000. To date, Evin has served as secretary for the USEF Paralympic Selection Trials & National Championships at the 2012 Festival of Champions in Gladstone, New Jersey, as well as a long-running involvement with popular CDI 3*s, The Dressage Affaire and the Del Mar Classic in San Diego. Today, Evin joins us from Portland, Oregon where is he currently preparing DevonWood for its 14th annual running of the popular Dressage at DevonWood show. To learn more about DevonWood Equestrian Center, please go to http://devonwoodec.com/.

Guest Keady Cadwell of Southern Pines, North Carolina started her riding career as an eventer, and began driving competitively in 1990. Cadwell has represented the U.S. at three World Championships in the pairs; she was part of the U.S. teams in 1993 and 2007. In 2007, she also competed at Windsor (England), Riesenbeck (Germany) and Beekbergen (The Netherlands). At Riesenbeck, Cadwell had a tremendous dressage test, where they placed third out of 50 pairs in dressage.

Cadwell and her pairs team had a remarkable year in 2008, taking home wins at the Sunshine State CAI, Live Oak CAI, Southern Pines and the Kentucky Horse Park CDE.

In 2009, Cadwell took home the blue ribbon at the Sunshine State CAI in February, and placed second at the Live Oak CAI in March.

Since 1998, Cadwell has been involved with the U.S. Para-Equestrian Driving Team. She has participated primarily as a coach or chef d’equipe at nearly every World Championship for Para-Driving in the last 10 years. Cadwell assists fellow World Championship driver and sister, Miranda Cadwell, running the family’s Tremont Farm in Southern Pines, NC. To learn more about Keady, please go to www.tremontfarm.com.

Once a month the Dressage Radio Show becomes the Para-Equestrian Show Hosted by Lindsay McCall, of the United States Para-Equestrian Association, focusing on international FEI discipline Para-Dressage. Although Para-Dressage is the main event, listeners have the opportunity to learn more about the skillful U.S. Para-Driving Team, the Para-Reining discipline, Para-Vaulting, and the future of Para-Jumping. The para-equestrian dressage show will feature a line-up of guests including Olympians, Paralympians, trainers, coaches, professionals, amateur riders, young riders, and equine enthusiasts. The intention of the radio show is to educate, inform, and entertain listeners on the para-equestrian Dressage discipline.

To learn more about the USPEA, please visit www.USPEA.org or e-mail President Hope Hand at hope@uspea.org. You may also e-mail the host of the para-equestrian segment Lindsay McCall at Lindsay@uspea.org.

About the Horse Radio Network:

The Horse Radio Network is the voice of the horse world with listeners in over 40 countries. Eight different entertaining shows cover all aspects of the horse world and you can listen any time on your computer, MP3 player or smart phone.

We believe that people own horses for fun and entertainment. Why else would you put up with the early morning feedings, stall cleaning, vet bills, long trips to shows, empty bank accounts and everything else that goes with being a horse owner?

Our goal with these shows is to help your chores go a little faster and to put a smile on your face!  Learn more at www.horseradionetwork.com.

HORSES IN THE MORNING live M-F at 9am Eastern at www.horsesinthemorning.com.