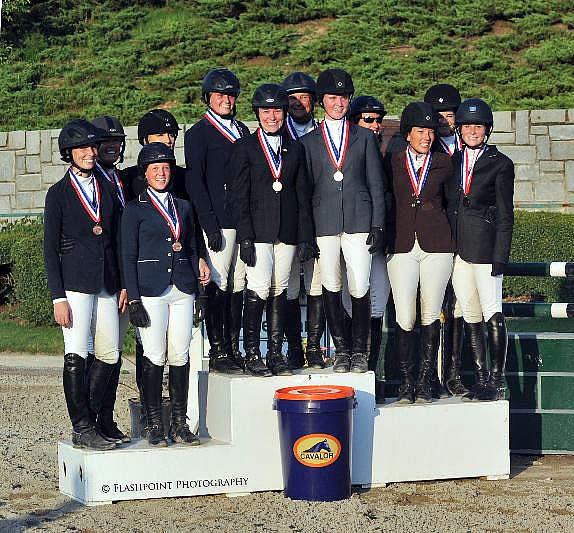 The mood was festive last week in Conyers at the Georgia International Horse Park when the Classic Company produced the first-ever USHJA Child/Adult Jumper Regional Championships.  This latest addition to the USHJA’s list of innovative competitions was a huge success!

Thirty-nine horses passed their inspection and were ready to go in Thursday’s opening round of team competition.

The individual Children’s section saw 23 in the starting field. By the final round six riders found themselves in a jump off for the Bronze medal, while Michael Mahoney of Haymarket, Virginia and Gabby Hensley of Clarksburg, Maryland battled it out for the gold.  Each dropped a rail so time decided their final standings with Mahoney receiving the gold; Hensley accepted the Silver and Nanny McFadden of Germantown, Tennessee was awarded the Bronze medal.

As an added bonus, Mahoney was awarded a spot in a USHJA Emerging Athletes Program 2014 Regional Clinic of his choice.  Each of the individual children’s gold medalists from the remaining three regional championships will be presented with this same opportunity.

Sixteen Adult Amateurs competed for individual honors. Ericka Caslin had solid rides throughout the three days of competition, and in the last round found herself winning a three way jump off for the Bronze medal. Heather Crespo of Aiken, South Carolina came into the final round ahead in the standings with only six faults, but picked up four additional faults for a total of 10 faults overall and the Silver medal position. Andrea Randell of Monticello, Florida claimed the gold medal.

Chris Murphy, USHJA Zone Jumper Coordinator, commented, “I started with this task force about two years ago.  The concept was first proposed at an annual meeting, and after much work on the original proposal and with the help of a working group, the proposal was approved.  Registration for the event just happened a bit ago and overall, we have more than 300 applications.  The South region had a really short qualifying time but we had a very positive response and about one third of our registrants hail from the South.  I think that all and all, the weekend went really well; the kids and adults really enjoyed it,” she added.  “I really want to thank Janet McCarrol and Bob Bell for helping to make this a huge success. We are always open to suggestions from trainers and riders to continually improve upon this event.”

The $10,000 Pony Hunter Derby Classic saw 38 pony and rider combinations compete for the prize money and honors, but it was All Natural, owned and ridden by Storm McCormick of Parker, Texas, who took the championship ribbon and $3,000 first place check.  In second place was Steal the Crowd, owned by Don Stewart and ridden by Bernadette Chungunco from Fairfax, Virginia, while third place was awarded to Tantalon Co-Captain, owned by Cecilia D’Amore and ridden by Lilly Bennett of Alpharetta, Georgia.  For more information on the winners in this class, click here: http://horseshowsonline.com/ClassResults.aspx.

IN OTHER HIGHLIGHTS NEWS:

The debut of the Freestyle Equitation saw 18 compete over a course personally orchestrated to the rider’s choice of music.  “What a fun class!” commented Gulf Coast Classic Coordinator Janet McConnell.

The Classic Company is heading to the beach!  That’s right, it’s time to jump the jumps AND the waves all at the Classic Company’s Charleston Summer Classics. Surf and standards are the perfect combination for your family vacation that kick off July 10.  And this year the Classic Company celebrates with back to back $25,000 grand prix classes.  Make sure to get your entries in now because this is the horse show and vacation destination the entire barn will enjoy.

Anyone who has shown with the Classic Company knows what sets them apart from the rest:  Classic Shows are FUN!  Complimentary exhibitor parties, luncheons, Saturday pizzas and the friendliest show management team anywhere work hard to make your showing experience the best.  Classic Company never charges an add or scratch fee for those last minute changes and there is no office fee added for credit card payments. For those who have not yet entered, go to the prize list or simply click on Equestrian Connect to fill out your entry form and stabling requests.