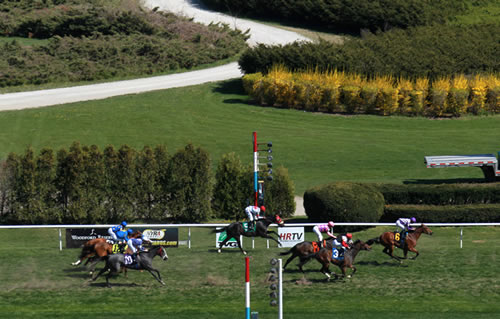 Horse racing fans will appreciate the legacy of the sport found in New Jersey. With three racetracks offering thoroughbred racing, there are plenty of opportunities to catch all the action.

When it comes to horse racing, visitors and residents alike have no shortage of choices with three tracks that feature harness and thoroughbred racing at its best. Get 2 Risk-Free Bets up to $1,000 with the Pointsbet promo code. Freehold Raceway, in Freehold, is the nation’s oldest and fastest daytime half mile harness racing track and home to the Cane Pace, which is the first leg in the Triple Crown of Harness Racing for Pacers. Located in central New Jersey, in the historic town of Freehold, Freehold Raceway was established in 1853 and features live Standard bred harness races for trotters and pacers. The raceway’s season runs from August through early June. The racetrack is also open seven days a week and seven nights for year-round thoroughbred and harness racing simulcasts from tracks throughout North America. Freehold Raceway is located at the intersection of Rt. 9 and Business Rt. 33 in Freehold, New Jersey and is directly across the street from the Freehold Raceway Mall.

Nearby, in Oceanport, is Monmouth Park, which hosts thoroughbred racing. Monmouth Park has been a Shore tradition since 1870. It’s also the home of the $1 million Haskell Invitational that’s held every August. On Haskell Day, admission gates open at 10am with the first race at noon. In addition to all the great racing, Monmouth Park hosts numerous special and family events. Every Sunday from noon to 4pm is Family Fun Day Starting “On the Green” and spreading all the way to the picnic area, visitors will find clowns, face painters, live music, pony rides, a bounce house, the park’s mascot Cocoa Puff, and more. In addition, there is a playground in the picnic area and an arcade on the first floor of the Grandstand. Monmouth Park has a variety of dining options from casual concessions to upscale dining in the dining terrace.   Monmouth Park is the Jersey Shore’s premier destination for live Thoroughbred racing with free Family Fun Days every Sunday (Memorial Day to Labor Day). Check out monmouthpark.com for a list of season events such as the Shore Chef Crabcake Cook-Off and BBQ & Craft Beer Festival. Live racing May – Sept. $3 Grandstand admission, $5 Clubhouse admission, and children 12 and under are always admitted free.

East Rutherford is home to the Meadowlands Racing & Entertainment across from MetLife Stadium, which is the home field to the New York Giants and New York Jets. Live harness racing began at the Meadowlands in 1976 before an opening day crowd of 42,133. Nighttime harness racing was an immediate hit in New Jersey and racing was about to change for the better – and for the bettor. The following year thoroughbred racing debuted at the racetrack before a crowd of 25,158. The Meadowlands Racetrack is also host to the world’s most famous trotting event, the Hambletonian, which has had a number of different homes and was first held at the Meadowlands on Aug. 8, 1981.

The Horse Park of New Jersey at Stone Tavern is a 185-acre equestrian center that offers something for every horse lover. From show riders to dressage practitioners, trail-riders to trainers, the center offers regular equestrian events for the most experienced riders to the first-timers.

The United States Equestrian Team (uset.org) makes its home at the historic Hamilton Farm west of New York City. The team has won several equestrian events at the Olympic Games and hosts a variety of events throughout the year from dressage to side saddle.