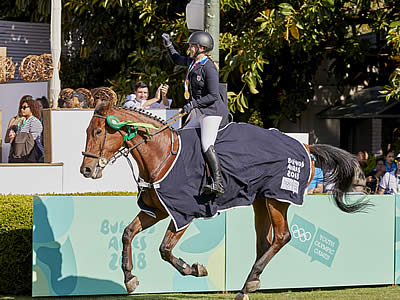 Round 2 of the equestrian team competitions at the Youth Olympic Games Buenos Aires 2018 had everyone on the edge of their seats, as Team North America and Team Europe battled for the gold medal in a nail-biting jump off, whilst Team Africa settled for the bronze.  Full results can be found here.

Victory was no easy feat, with both teams fighting and producing the three clear rounds, which would count towards their final score of 0. It was all down to the speed with which the five riders from each team tackled the jump-off course. Both teams showed tremendous calm under pressure, but at the end of the day Team North America made the difference with some very speedy and precise performances, relegating Team Europe into a very respectable second place.

The five nations making up the North American team – Haiti, Honduras, Mexico, Panama, and USA – were clearly over the moon. On the one hand, they had won gold, and on the other, this was the first time North America claimed the team gold following consecutive wins from Team Europe in 2010 and 2014. For Haiti and Honduras, this was their very first gold medal ever won at Olympic and Youth Olympic level across all sports since the reinstatement of the modern Olympic Games in 1896!

For USA’s Mattie Hatcher, the YOG experience so far is second to none with her horse Santa Rosa Valery delivering everything and more:

“Well you know we only had 4 days (to get to know each other) but it went really well. She was easy to click with and she was so willing with everything, so great.”

In silver medal position, and literally seconds behind Team North America, the all-male Team Europe put on a great performance. For Great Britain’s Jack Whitaker, who was also celebrating his 17th birthday, this silver medal came 34 years after his father Michael Whitaker won team silver at the 1984 Los Angeles Olympic Games alongside his uncle John Whitaker. A family affair which clearly keeps on giving.

Team Africa was delighted with their bronze medal on 1 penalty point. Chance would have it that Zimbabwe’s Youth Olympic Games Young Change Maker Yara Hansen was nominated to hand out the gifts to the bronze medal winning team. Yara had been in their very shoes eight years prior, when Team Africa had won the equestrian bronze team medal at the Youth Olympic Games Singapore 2010.

All in all, it was a wonderful day of sport: exciting, full of suspense, and impressive! But beyond the sport in the field, what was truly remarkable was the team spirit around the field. The teams – which are made up of five separate nations brought together by the pure coincidence of qualification and geography – have clearly bonded. Athletes, coaches, parents, and all the accompanying persons have built relationships in a matter of days. Everybody has come together for a unique experience and unique Games here in Buenos Aires.