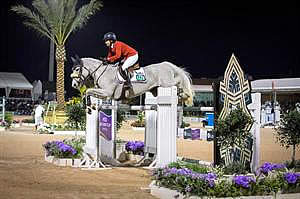 Wellington, Fla. – Clear rounds were the order of the night on Friday evening as 12 teams went to task over Steve Stephen’s 12-obstacle track in the Furusiyya FEI Nations Cup presented by G&C Farm, the feature competition of CSIO4* Wellington. The Hermès U.S. Show Jumping Team headed into the Palm Beach International Equestrian Center’s International Arena for the two-round competition, held in conjunction with the FTI Consulting Winter Equestrian Festival, looking to secure a top finish in America’s only Nations Cup. The team of McLain Ward, Brianne Goutal, Laura Kraut, and Beezie Madden jumped to a third-place finish on a score of 12 faults.

While the Hermès U.S. Show Jumping Team was looking to start their 2013 campaign with a win on home soil, Chef d’Equipe Robert Ridland was pleased with his team and their resilience.

“We felt that we were in it until the very end; it was just a rail here and a rub there,” said Ridland. “This is a Nations Cup we can be proud of that was a tough competition between 12 very good teams.”

Jumping in his customary lead-off position, Ward (Brewster, N.Y.) and Sagamore Farms’ Rothchild produced an immaculate clear in round one to start the night for the United States. In round two, the two-time Olympic Team Gold medalist and 13-year-old Warmblood gelding returned with an eight-fault trip after lowering the heights of the bicycle at six and the final oxer, fence 12.

Goutal (New York, N.Y.) jumped in the second spot for the U.S. with Remarkable Farms’ 13-year-old Selle Francais gelding, Nice de Prissey. In the first round, the pair jumped a four-fault trip after rolling a pole jumping out of the double at nine. In their return trip to the International Arena, they appeared to be on track for a clear round but again were plagued by a rail at fence nine, faulting at the A element in round two.

Kraut (Royal Palm Beach, Fla.) and her Team Gold medal-winning partner from the 2008 Olympic Games, Cedric, were the third combination to head into the International Arena for the U.S., completing a faultless round in their first trip. Cherry Knoll Farm, Inc.’s 16-year-old Holsteiner gelding was poised to join the double clear list but barely dipped a foot in the open water at 10, resulting in a four fault effort for the second round.

Anchoring the U.S. effort on Friday night were reigning FEI World Cup Final champions, Madden (Cazenovia, N.Y.) and Simon. Abigail Wexner’s 15-year-old gelding looked on track to jump a clear, tidy round until coming a bit strong to 11 and lowering the oxer at the A element, resulting in a four-fault effort. The veteran pair returned to the International Arena for a second time and never looked in doubt of a clear round as they cruised faultlessly over Stephen’s track.

“I was happy with my horse,” said Madden. “I wish I had been clear in the first round because I thought he went fantastic, and then he was clear in the second round and went even better.”

On Friday, the U.S. also earned vital points in qualifications for the Furusiyya FEI Nations Cup Jumping Season Series Final. Among countries from the North and Central America and the Caribbean Islands regions, the U.S. earned 90 vital points towards qualifying for the Series Final in October.