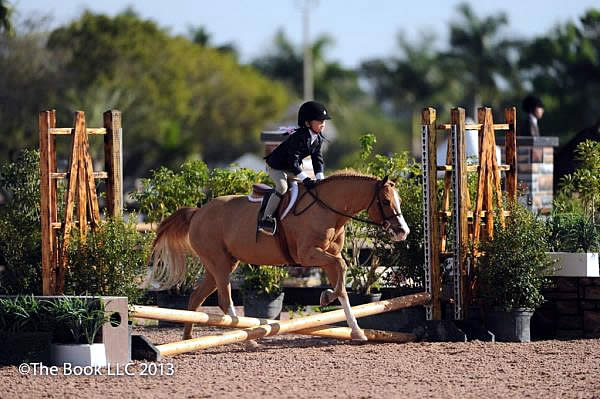 Wellington, FL – March 7, 2013 – Mark Leone trotted his way to impressive placings in the Short Stirrup division during week six of the Winter Equestrian Festival. Now just three short weeks later, under the tutelage of Linda Smith-Faver at Happy Endings Farm, Leone has quickly jumped his way up the divisions to be a top contender in the Medium Children’s Hunters and the Equitation 11 & Under.

During week eight, Leone and his mount Care Bear, owned by Hannah Patten, finished in the ribbons in the Medium Children’s Hunters besting many of the 16 talented young riders competing in the division. Leone’s successes come after a few months away from riding; now back in the saddle and under Smith-Faver’s careful instruction, the sky is the limit for the gifted up-and-comer.

Parker Wright is another rising star taking the reins for Happy Endings Farm as a catch rider. This past week, Wright rode Barbara Milanese’s Miss Ticket to Ride to ribbons in each one of the over fences class in the Children’s 14 & Under Hunter division. Wright trains with Elizabeth Pandich out of Lionshare Farm. Miss Ticket to Ride was bred and raised at Happy Endings, only make her debut at the Winter Equestrian Festival this 2013 season.

Happy Endings Farm will show at the Winter Equestrian Festival throughout the 12-week series, and then will travel north for the summer shows. To stay up-to-date with Linda Smith-Faver and Happy Endings Farm, follow them on Facebook at http://www.facebook.com/HappyEndingsFarm?ref=ts&fref=ts. You can also visit their Web site at http://www.happyendingsfarm.com/.