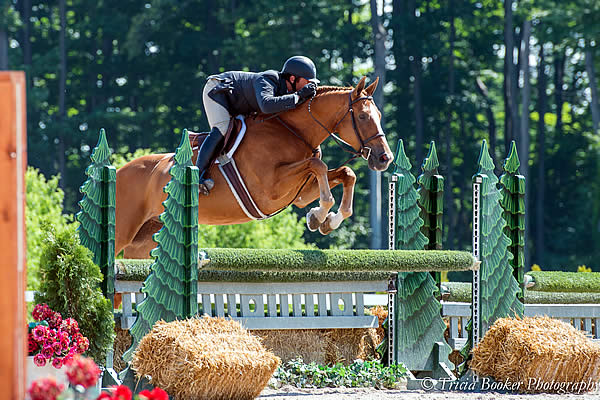 Traverse City, MI – July 19, 2013 – Greg Crolick shot to the top of the standings in the hunt for the $10,000 North Face Farm Leading Hunter Rider Cash Bonus Award following his victory in the $2,500 USHJA National Hunter Derby during Series I of the Horse Shows by the Bay Equestrian Festival. Then during Series II, Crolick returned to finish both second and third in the $2,500 USHJA National, further increasing his lead to 130 points – 65 points more than current second position holder Caitlyn Shiels.

The $10,000 North Face Farm Leading Hunter Rider Cash Bonus Award was introduced for the first time this year to award the riders who accumulate the most points in the five hunter derbies held throughout the four week Horse Shows by the Bay Equestrian Festival. Riders receive points for their highest-placing horse in each of the weekly $2,500 USHJA National Hunter Derbies and the final week’s $20,000 USHJA International Hunter Derby.

Crolick earned the blue ribbon the first week with Grey Street, owned by Adrienne Marciano, and the duo came back to finish third the second week, while Crolick claimed the second place award with impressive new mount Shocktop, owned by Anne Hamilton.

Initially imported for the jumper ring, Shocktop was instead sent to Crolick to see how he would fare as a hunter. With the second place finish in the derby and top three finishes, including a win, in the High Pre-Green 3’3″ Hunters, the 9-year-old Warmblood seems to have found his niche.

“He was imported with the intention of being a jumper, but the thought was that maybe the hunter career would be an even better fit for him,” Crolick shared. “I had him for a week just to play around with him. Then by the second week I put him into the horse show, and he was outstanding as a Pre-Green horse. I put him in the derby to see how he would be and to teach him a little bit. He was amazing, absolutely wonderful.”

Crolick continued: “He is pretty cool. I really think he’s going to end up being a future big derby and high performance horse.”

The fourth place award in the competitive, 41 entry Series II $2,500 USHJA National Hunter Derby also went home to Crolick’s Top Call Farm, with new Top Call Farm rider Courtney Schwabauer and her own mount Lugano. Schwabauer was also consistently in the ribbons in the Large Junior 16-17 Hunters throughout the week.

Other Top Call Farm students raking in the ribbons during Horse Shows by the Bay Series II included Courtney Trott and Alyssa Mitchell. Trott rode to multiple first and second place finishes in the Children’s 15-17 Hunters aboard both Grey Street and Beyond Belief, owned by Cloverlane Farm LLC. Mitchell dominated the Low Children’s Hunter division earning two blue ribbons and the division championship aboard her own Carlotta.

Top Call Farm riders have returned for Series III running July 17-21, 2013, and this evening, Friday, July 19, Crolick will compete in the $20,000 USHJA International Hunter Derby in an effort to hold on to his lead in the $10,000 North Face Leading Hunter Rider Cash Bonus standings.