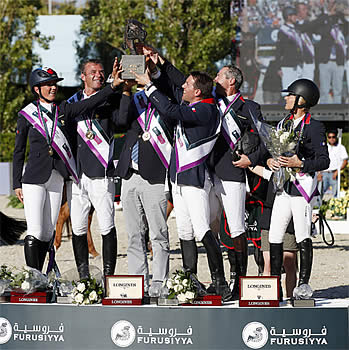 Lausanne (SUI), 5 February 2014 – A year ago, few could have guessed that the beginning of the 2014 Furusiyya FEI Nations Cup Jumping series would be met with such anticipation and excitement. As the inaugural series got underway in February 2013 there was considerable concern about dramatic changes to the long-established and much-loved FEI Nations Cup Jumping format, including expansion that would draw in many new countries from around the globe.

However by the time the French team stood on the top step of the podium at the end of the thrilling opening season finale at the Real Club de Polo in Barcelona, Spain last September, all that had changed and the new concept had received a firm stamp of approval.  The best emerged to reign supreme, but horse-and-rider combinations from many less well-known nations also got the chance to demonstrate their skill and promise as the sport opened its doors like never before.

It comes as no surprise then that the opening of the 105th Nations Cup season this week is so eagerly awaited.  The lessons learned, and the experienced gained, over the last year look set to pay dividends for many of the less-experienced countries, and with the Alltech FEI World Equestrian Games 2014 in Normandy (FRA) just around the corner, the Furusiyya series provides the perfect testing ground for team combinations in the months ahead.  It all begins with the single qualifier staged in the Middle East region which kicks off tomorrow, Thursday 6 February, in Al Ain (UAE).

A total of six nations will contest this first event including Saudi Arabia, the country that took team bronze at the London 2012 Olympic Games and which, through the Saudi Equestrian Fund, sponsors the Furusiyya series. However only three of the six competing nations – Saudi Arabia, Qatar and United Arab Emirates – will be vying for the two available qualifying spots for the Barcelona Final, while Jordan, Syria and Ukraine will not.

The Ukrainian team will be chasing points in Europe Division 1, the most high-profile qualification group that also includes Belgium, France, Germany, Great Britain, Ireland, The Netherlands, Spain, Sweden and Switzerland.  The number of countries in this division is extended from eight to ten this year, and as always there will be eight legs, with just four counting for points.  A total of seven teams will qualify for the Final from this League.

The Europe Division 1 action begins at Lummen (BEL) in May before moving on to La Baule (FRA), Rome (ITA), and St Gallen (SUI) later that month and then on to Rotterdam (NED) in June before taking in Falsterbo (SWE) and Hickstead (GBR) in July and then Dublin (IRL) in early August.

A total of 15 nations will compete in the Europe Division 2 series which also has eight legs – Linz-Ebelsberg (AUT), Copenhagen (DEN), and Lisbon (POR) in May, Sopot (POL) in June, Budapest (HUN) in July, Gijon (ESP) and Bratislava (SVK) in August and finally Arezzo (ITA) in September.  The countries participating in Europe Division 2 are Austria, Croatia, Czech Republic, Denmark, Finland, Greece, Hungary, Italy, Norway, Poland, Portugal, Russia, Slovenia, Slovakia and Turkey and just two of these countries will go through to the Final.

There will be a new addition to the North America, Central America and Caribbean League with a visit to Coapexpan (MEX) for this league’s second leg in May.  Teams from Canada, Mexico and USA will be in action in this league which begins in Wellington, Florida (USA) at the end of February and will conclude at Spruce Meadows in Calgary (CAN) in June.  Again, there are two qualifying spots available, while two further places are up for grabs in both South America and the Asian region and one in Africa.  These are decided by placings on the Longines Rankings within an eight-week period of the Final which this year moves to October 9 to 12.  Once again, the overall number of teams competing at the Final will be 18, plus the home team if not qualified.

This week however all eyes will be on the Middle East and the intriguing first leg of the Furusiyya FEI Nations Cup Jumping 2014 season.

The Ukrainian side looks strong, with the ultra-experienced Ulrich Kirchhoff and Cassio Rivetti providing a firm base for team-mates Oleksandr Onyschenko and Ferenc Sventirmai.  Jordan meanwhile fields a side that includes Nasouch Kayali and Ra’ad Naser along with cousins Maysam and Ibrahim Bisharat.  The Bisharat family has long been pioneers in horse sport in their country.

The UAE has listed Sheikha Latifa bint Ahmed Al Maktoum, Abdullah Humaid Al Muhairi, Mohammed Ghanem Al Hajri, Abdullah Al Marri and Nadia Abdul Aziz Taryam, while there will be great interest in the side from Qatar as Ali Youself Al Rumaihi has been listed with two horses, one of which is the fabulous Palloubet D’Halong which was so successful for Switzerland’s Janika Sprunger before being sold last year.

However the Saudi Arabian team will also be hoping to clinch one of the two available qualifying spots for the Final as they did last season, and they are sending out their London 2012 Olympic bronze medal winning team of Ramzy Al Duhami, Kamal Bahamdan, HRH Prince Abdullah Al Saud and Abdullah Sharbatly. Armed with a wonderful string of horses they should be the ones to beat, and you can watch the new season begin to unfold by following the live action on FEI TV, starting at 18.25 GST (local time in the UAE) on Thursday 6 February.

The forthcoming season comprises 20 qualifiers in as many countries.

A total of 40 nations will compete for points in the qualifying rounds.

There will be eight qualifying legs in Europe Division 1 and 2, three in the North America, Central America and Caribbean League and a single event in the Middle East – at Al Ain (UAE) where the 2014 season gets underway tomorrow Thursday, 6 February.

The Furusiyya FEI Nations Cup Jumping Final will once again take place at the Real Club de Polo in Barcelona (ESP), venue for the Jumping events during the Barcelona Olympic Games in 1992.

A total of 18 teams, plus the home team if not qualified, will compete at the Final which will take place from 9 to 12 October 2014.

Only Qatar, Saudi Arabia and the UAE will be competing for qualifying points.

Europe Division 1 has been expanded to include 10 teams this season – they are Belgium, France, Germany, Great Britain, Ireland, Netherlands, Spain, Sweden, Switzerland and Ukraine.

Furusiyya is the brand name for the commercial arm of the Saudi Equestrian Fund which finalised a 16 million Euro five-year sponsorship package with the FEI in November 2012.

Longines has been based at Saint-Imier (SUI) since 1832. Its watchmaking expertise reflects a strong devotion to tradition, elegance and performance. It has generations of experience as the official timekeeper at world championships and as a partner of international sports federations. Longines’ passion for equestrian sports began in 1878, when a timepiece was made with a horse and jockey engraved on the watch face. Over the years, the brand has built strong and long-lasting links with equestrian sports. In 1926, for the first time, the brand was involved as timekeeper for the Official International Equestrian Competition of Geneva.

Today, Longines’ involvement in equestrianism includes Jumping, Endurance and flat racing. Longines is a member of The Swatch Group S.A., the world’s leading manufacturer of horological products. With an excellent reputation for creating refined timepieces, the brand, whose emblem is the winged hourglass, has outlets in over 130 countries.