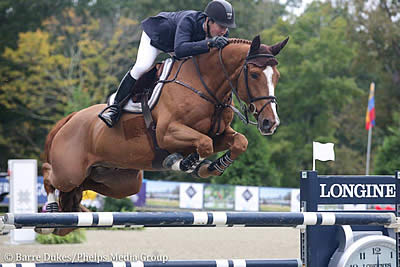 North Salem, N.Y. – Sept. 28, 2018 – Fresh off his gold medal victory with the NetJets® U.S. Show Jumping Team at the FEI World Equestrian Games™ (WEG) in Tryon, North Carolina exactly one week ago, McLain Ward returned to his home state of New York to claim his spot in the winner’s circle once again in the $80,000 American Gold Cup Qualifier CSI4*-W with new mount Contagious.

A total of 14 athletes jumped clear over Ireland’s Alan Wade’s first round track in the Annex Ring, but almost half fell victim to time faults due to the tight time-allowed of 76 seconds. Only eight were able to produce fault-free rounds to move on to the jump-off.

Kicking things off in the tiebreaker was Canada’s Ali Ramsay aboard her own Hermelien VD Hooghoeve, finishing double-clear and going straight to the top of the leaderboard in 39.71 seconds.

Ward entered as third in the order riding the 9-year-old German Sport Horse gelding owned by Beechwood Stables LLC and posted the next double-clear performance in 37.82 seconds to move into the lead.

Ward acquired the ride on Contagious just this summer, and the American Gold Cup is only the pair’s third show together. Their first victory came at the start of September in the $100,000 Hudson Valley Jumper Classic CSI5* at HITS Saugerties.

O’Shea finished second best in 38.10 seconds for runner-up honors, while Ramsay claimed third place and Jacobs rounded out the top four in 41.21 seconds.

The top 40 athletes and horses from Friday’s qualifying competition will move on to compete in Sunday’s highly anticipated grand finale, which kicks off the eastern sub-league’s 2018/2019 season of the Longines FEI Jumping World Cup™ North American League.

For the fourth year in a row, the American Gold Cup has been selected as one of only seven events that comprise the East Coast division of the Longines FEI Jumping World Cup™ North American League. Athletes compete in the league at events all across North America in order to qualify for the prestigious Longines FEI Jumping World Cup™ Final to be held in Gothenburg, Sweden, April 3-7, 2019.