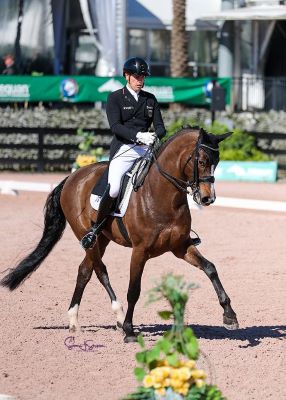 In unusually chilly conditions, first to go of eight small tour combinations, Germany’s Frederic Wandres, rode Hof Kasselmann’s Dolciario to the top spot in the Prix St. Georges with 72.156%. Both he and second-placed American rider Bianca Berktold — who partnered her own nine-year-old Charmeur mare, Imperial, to 72.009% — qualified for the final.

Eight-year-old Dolciario (by Danciano x Don Frederico) last appeared in the CDI ring at the six-year-old finals at Hagen in 2020 under the Czech Republic’s Eva Niklova. He and Wandres are a brand-new combination, as the horse was ridden by a colleague at Hof Kasselmann’s and Wandres only took over the reins when Dolciario arrived in Florida for AGDF.

“This was the first time we competed together, and it was a very great start,” said the 35-year-old Wandres, who is ranked 18th in the world on his top horse, Duke of Britain FRH. “We were the first starters in the class. That’s sometimes not easy, but we ended up very well. Dolciario was very relaxed with the atmosphere. It was a bit windy and there was enough going on to look at, but he was really focused and concentrated.”

The test was marred only by a muddled single flying change, but eights all over the rest of the sheet meant the overall marks stayed high enough for the win.

“The best parts were the whole trot tour, and the walk,” said Wandres. “The most expensive mistake was the broken flying change in the end of the extended canter, which was nearly not shown. There was a little bit of a miscommunication and he was not really listening maybe, but we have to get to know each other better and it is easy to prepare better for the next time.

“This series was a start for me and the horse. It’s very good because the other horses were also young horses. That’s something I really like. Now I would like to do some CDIs in the Small Tour,” added Wandres, who thinks Dolciario could be a useful small tour Nations Cup horse for Germany.

In the big tour class, Australian Olympian Kelly Layne snapped up a ticket to the final, riding Fernando to 70.490% at Intermediate II level. Ellen Trouillé’s 10-year-old gelding, by Foundation out of a Sandro Hit mare, was awarded a high mark of 73.382% from judge at H, Mariano Santos Redondo. Layne has been riding him since he was five.

“He was one of those horses that just followed the book,” said Wellington-based Layne. “When he was supposed to learn the flying change, he learned the flying change. He just learned it all like he’d already done it before. By the time he was seven, he was already up to green PSG. At eight he could do the piaffe and passage, but it’s still a little soon to go into the big classes with him. I still want him to get the exposure to the big atmosphere without putting the pressure on him.”

Layne competed in this class in AGDF 1 and was pleased with Fernando’s improvements since then.

“The flying changes were much more secure this week than two weeks ago, and I worked on getting the walk a bit more calm and being braver to let the rein out,” she explained. “He’s always a genius on the pirouettes, so I have to just set him up and let him do his job. I can always add more power to the piaffe/passage, but he was really secure and has amazing rhythm and tempo. As he gets stronger that will be a major feature, and I do believe that he is a big-time show horse. He doesn’t have any weakness in his body physically, and mentally he’s the horse that will go in the big stadium and do his job. They’re rare.”

Layne is a big fan of the developing horse classes: “I love this tour and being a part of it every year. It’s exciting putting horses of the same age a little bit against each other. It’s just a wonderful avenue, and I’m so excited,” she added.

Christina Vinios (USA) continued her unbroken winning streak with Five Rings Farm’s 18-year-old Deauville, by Del Gado. The Wellington-based rider topped the Intermediate II CDI3* with a new personal best of 67.559%. The pair is unbeaten in all four of their international starts, having first stepped into the CDI ring in AGDF 1. Ali Potasky (USA) continued her dominance of the small tour divisions at AGDF 2022, leading the Intermediate I Freestyle CDI3*, presented by VitaFlex. Riding Irintha, Kathy Priest’s nine-year-old mare by Everdale, she scored 71.850%, with a high artistic mark of over 78% from the judge at C, Janet Foy.

Sunday’s result marked the third win for the pair during AGDF 3, and they remain unbeaten in all six of their CDI starts this season.