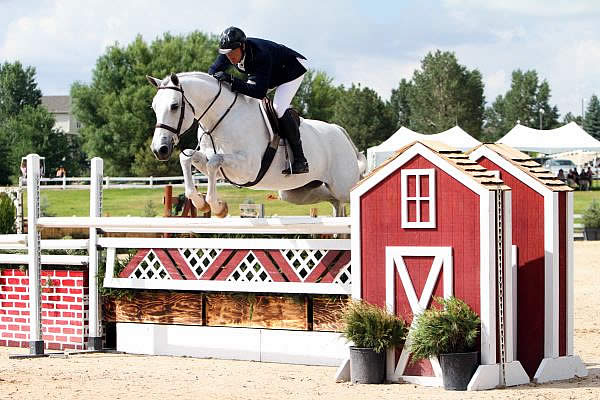 Freddie Vazquez and Presently were victorious in the $15,000 USHJA International Hunter Derby.

Parker, CO – July 14, 2013 – The battle for the title in the $15,000 USHJA International Hunter Derby at Summer in the Rockies V came down to the handy after a tie in the first round, and Freddie Vazquez chose an effective path and laid down a brilliant trip with Mark Senn’s Presently to secure the win over Kelli Cruciotti and Monterrey.

“My horse could not have jumped better,” Vazquez said. “He was fabulous. It was a beautiful day to ride today, a good temperature and a beautiful sky.”

Twenty-two horses and riders came out for the International Derby. In the classic round, Cruciotti and Monterrey scored 178, a score no one could touch until Vazquez and Presently, competing third to last in the order of go, matched it.

Vazquez was awarded the victory in the classic round, with the first judging panel’s scores serving as the tiebreaker. But he had his work cut out for him to produce a handy round good enough to best Cruciotti, a young but formidable competitor who came into the class off a win three weeks ago in the International Derby at Summer in the Rockies III.

“The tie always makes me a little bit nervous, because I’ve got to then really turn it on,” Vazquez said. And turn it on he did. He and Presently found their way through the handy course with style, earning base scores of 86.5 and 85.5 from the two judging panels, plus 4 high option points and a 7-point handy bonus from each panel. Their 194 in the second round sealed the win over Cruciotti, who scored 187.5.

“We did all the high options,” he continued. “We had a nice trot fence. I tried to just allow a nice gallop for my ride, and then after the hand gallop I wanted to make sure he came back to me and could reach some height at the oxer. Obviously I’m very pleased.”

Course designer Skip Bailey offered the riders many options throughout the course. “I always give options,” Bailey said. “The riders love choosing their own path.”

The course began with a choice between two similar jumps facing different directions. Competitors then rode through the middle of the ring and over the “snake” obstacle, which had several segments that could be jumped from either direction. From there, they chose between two jumps set at a right angle in the middle of the arena and then continued to fence 4, a single oxer. All of the options came into play as riders selected several different routes through the first three fences, with some choosing a longer, loopier path and some negotiating tight turns.

A distinguished group of judges was on hand for the International Derby. Frank Willard, Mark Jungherr, Brian Lenehan and Geoff Teall assessed the performance of horse and rider over the classic and handy courses.

“It was such a great course and it’s such a great ring with great footing,” Teall commented. “I thought he (Vazquez) was awesome. He’s really gotten so good. We’ve been talking about him all week – he’s really improved so much over the last year. There are so many things that can go wrong when you’re on top, and he just had a beautiful ride.”

Teall added that he was impressed by the younger riders in the class, including Cruciotti and third-place finisher Hunter Holloway. Holloway and Chianti’s Dream, owned by Hays Investment Corp., scored 197 for their handy trip to win that round. “It’s really fun to see the kids do it that well, and have the opportunity to do it,” Teall said.

While some riders ran into trouble at the first fence, nothing could stop Vazquez and Presently. “You couldn’t build a jump scary enough for him,” Vazquez said. ‘You could light one on fire and he’d be happy with it – it might get his attention a little bit.”

“The footing is great,” Vazquez continued. “It was a beautiful course built by Skip Bailey – I’m a big fan of Skip. Showplace Productions and Pat Boyle gave him an incredible amount of material to work with, and he built beautiful, impressive fences that allowed good derby horses to really show their ability.”

Vazquez, who trains out of Messenger Hill Farm in Libertyville, IL, alongside wife Jodi, thanked his staff for helping him achieve the win. “My staff is wonderful, and my grooms are incredible,” he said. “My wife, Jodi, prepared the horse beautifully. Katie Kappler, another one of our head trainers, is also an incredible asset to Messenger Hill Farm. My assistants, my shoers, my vets, Katie Kappler, and number one of all, my beautiful wife Jodi – without them, this wouldn’t happen. I get the easy part.”

The International Derby capped a day that began with the $2,500 CHP Pony Derby and also featured the $5,000 USHJA National Derby. “It’s really a nice day,” Teall said. “I’ve never seen one where they had three derbies in one day, and I really enjoyed it. They make it a big deal and it’s fun to have that many people watching. Skip always does a great job and Pat always does a great job.”

The National Derby proved to be popular, drawing 38 horses and riders. Brianna Davis and Riveting, owned by Sarah Engel, were consistent in both rounds to finish in first overall. Riveting and Davis sat just behind the leading pairs with an 84 in the first round and earned an impressive score of 89 in the handy to step up and clinch the win. Their total score of 173 was one point ahead of second-placed Kelley Buringa, riding Katie Thomas’ Yahtzee.

“I thought the course rode very nice,” Davis said. “I enjoyed all the fill and the course jumped well. Having that many options really made me think, that’s for sure. I just did what I thought would be easiest for my horse, with the turns and the different options.”

Davis, the head trainer at Mary Dunahay’s Savoy Stables in Littleton, CO, has worked with Riveting since the beginning of his show career.

“He’s one of the most special horses I’ve ever had,” Davis said. “I imported him as a three-year-old and I’ve had him with me ever since. He has a new owner that just bought him in Thermal, so she’s getting used to him. He’s a jack of all trades. He jumps beautifully, and the four white socks definitely help. He’s just very pleasant to watch.”

Rylee Shufelt and her own Harrington Park Quest started the day off by claiming the top spot in the $2,500 CHP Pony Derby. Shufelt trains with Lauren Stevens of Stepping Out Farm in Corrales, NM. She scored an 80 in both the classic and handy rounds to take first by a comfortable margin over second-placed Jordan Cobbs and John Wayne. She also finished sixth with her large pony, Camelot.

“The course was nice,” 10-year-old Shufelt said. “They gave you space to do the handy turns. I tried to take it subtle and make it seem nice and easy.”

Shufelt praised Harrington Park Quest and said she especially appreciates his attitude. “I love him,” she said. “He’s like, ‘Let’s do this, I know I’m at a horse show, I’m going to try.’ He’s just the best pony in the world.”