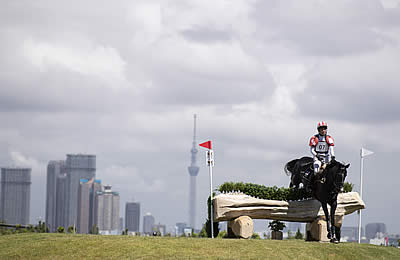 With optimising performance in challenging climatic conditions high on the agenda during the numerous Ready Steady Tokyo test events, the FEI had already put in place a major research study aimed at identifying best practices and management of horses training and competing in hot and humid environments.

Long travelling times and distances, time-zone disruptions, and heat and humidity pose specific challenges to horses and of course to human athletes. Monitoring of the combined effects of all these factors was put in place prior to the horses’ departure from their home countries en route to Tokyo and throughout last week’s equestrian test event in the Japanese capital. Data collected will be used to provide the FEI, the Tokyo 2020 Organising Committee (TOCOG), as well as National Olympic and Paralympic Committees with detailed information on equine performance in these conditions.

“High level equestrian competitions are increasingly taking place in parts of the world where the climate poses health challenges for both humans and horses,” FEI Veterinary Director Göran Akerström said.

“The study plays a crucial role in guiding the TOCOG and other Organising Committees on appropriate facilities and support, and will be used to advise and guide athletes and National Federations on the preparation of their horses in the build-up to and during the Olympic and Paralympic Games.”

The study monitored horses before, during, and after their journey to Tokyo, with data collected through under-tail temperature monitors and sensors that measure stable and travelling activity, as well as thermal comfort. SaddleClip sensors were used to record gait, speed, and distance, and heart rate monitors were used on the horses prior to and during competition. The technology for the data collection was made possible through the FEI’s partnerships with Epona Biotec, Arioneo, Equestic, and Polar.

Findings from the study will build on the existing framework for implementing measures to run equestrian sports in hot and humid climates that was developed for the Games in Atlanta 1996 and the Beijing 2008 Olympic Games in Hong Kong. Olympic test events prior to Atlanta 1996, Athens 2004, and Beijing 2008 also included organised monitoring of competing horses.

To ensure that NOCs and NFs are fully aware of the climatic challenges, the FEI included an information session on climate mitigation protocols aimed at minimising the effects of heat and humidity in the official Observers Programme, which ran concurrently with the test event.

During next year’s Olympic and Paralympic Games in Tokyo, equestrian sport will be held at the Baji Koen Equestrian Park and Sea Forest venues. Baji Koen, which hosted the Olympic equestrian events at the Tokyo Games in 1964, has been extensively refurbished by the Japan Racing Association, while the cross country venue at Sea Forest that will be shared with rowing and canoe sprint is on reclaimed land and will be turned into a park post-Games.