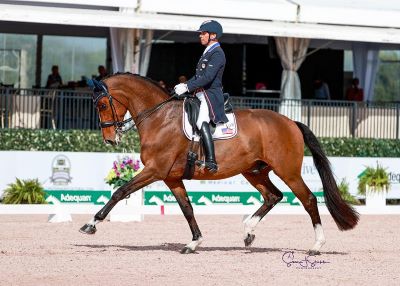 Wellington, FL – January 30, 2021 – The Adequan® Global Dressage Festival continued on Saturday, January 30, with a consecutive win for the USA’s Steffen Peters and Suppenkasper in the FEI Grand Prix Special CDI4*, presented by Havensafe Farm. Peters and Akiko Yamazaki and Four Winds Farm’s 2008 KWPN gelding by Spielberg topped the class of 11 entries, earning a final score of 75.766%.

“The grand prix special is always my favorite test,” began Peters. “It has those beautiful transitions from extended trot to passage, and then the half-passes are a little easier to ride, so there was a bit more of a throttle there with Mopsie today because he was so relaxed. The passage tour felt really good, and I really thought I had him there for the one tempis – I really collected him on the short side, and then I risked it a little and it was just a tad too much, so we had a small mistake. But he’s done five shows in a row without a single mistake, and at the end of the day I am human, and they’re horses and not machines, so those things happen.”

Peters was happy with his mount’s strengths during the performance and noted his relaxation in the walk and patient transitions into piaffe. He explained, “He walked nicely, which is a challenge for him in the grand prix special because he gets so fired up from all of the extensions and all of the passage, and to get him to relax is not an easy thing. However, he waited patiently for me to ask for the piaffe; he didn’t anticipate it, so overall it was a good test and I’m happy with it.”

The pair won’t be back in the Global Stadium Arena at Equestrian Village until the five-star at AGDF 7, and Peters plans to work with U.S. Dressage coach Debbie McDonald on improvements between now and then. However, he noted, Mopsie will get some time to relax as well.