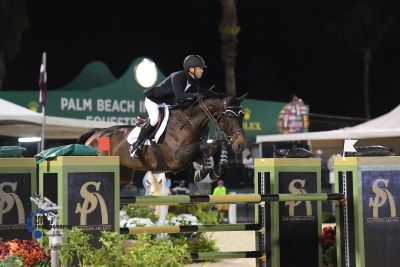 Saturday afternoon featured the highlight jumper event of the competition as Kent Farrington (USA) and his own Orafina jumped to the top of the leaderboard in the $50,000 Spy Coast & Sweet Oak Farm Grand Prix. The 16-effort course set by Eric Hasbrouck (USA) in the International Arena saw 53 horse-and-rider partnerships contest the track, with nine athletes successfully turning in fault-free rounds to advance to the jump-off. Mario Deslauriers (CAN) led the way, and he was soon joined by Ilan Bluman (COL), Santiago Lambre (MEX), Schuyler Riley (USA), and Erynn Ballard (CAN) by the halfway point. In the latter portion of the pack, Willie Tynan (IRL), Kent Farrington (USA), Ashley Vogel (USA), and Ashley Fleischhacker (USA) also added their names to the list.

Following faults from the first five partnerships, Tynan and Michelle Guardino’s Fancy Girl finally turned in the initial clear round of the jump-off as the sixth duo to go in a time of 41.51 seconds to claim the early lead over the abridged pattern. Their top spot did not hold long though, as Farrington and Orafina were the next to follow and galloped to a foot-perfect time of 40.58 seconds. Tynan and Fancy Girl retained the second spot, followed by Fleischhacker on Quadros 3, owned by Ashland Show Stables LLC, in a clear time of 44.817 seconds, the final double-clear partnership.

“Orafina is a great young talent,” commented Farrington of the eight-year-old KWPN mare by For Fashion x Canturo. “She doesn’t have a lot of experience, certainly not like this. Really hats off to the team here that keeps these shows going for us and allows us to keep doing our job and our sport. Early in the season like this, it’s great for these young horses to get into the main ring. Tonight they even got a little taste of going under the lights. All in all, even besides the win, this was a great experience for my horse.”

Saturday’s victory was the second major win for Farrington and Orafina of the week, after also topping the $15,000 Paul Tracy Farrier Services Welcome Stake on Thursday as the quickest clear pair from the 14-horse jump-off. As the second duo to navigate the short course, designed by Hasbrouck, Farrington and Orafina served as the pathfinders with the first double-clear ride of the day, setting a lightning-fast precedent in 38.04 seconds. As the second round of riding progressed with 12 more combinations, it became clear that the frontrunners’ time would hold to claim the top spot by nearly two full seconds.

“Somebody that I work with in Europe, Leon Thijssen, said he had a horse that he thought I would like and would work for me because it’s extremely careful,” remarked Farrington of the new relationship with Orafina. “The plans are to build her up, just like always. Keep doing what we are doing by giving her positive experiences and time to mature. We will let her grow into herself. It was a great first step tonight.”

Though Mark Bluman (COL) and Amanda Derbyshire (GBR) managed to stop the timers slightly quicker than the winning pair, they both did so at the expense of a downed rail to incur four faults. Riding Stone Hill Farm’s Hungry Heart, Jessica Springsteen (USA) earned second place with a clear time of 39.81 seconds, and Jonathon Millar (CAN) rounded out the podium in third aboard Shadow De Shalimar, owned by Isotropic Networks Inc.