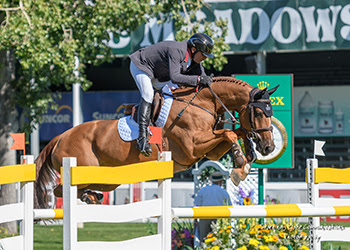 “In two weeks, we are off to the world championships and I’m using Spruce Meadows as his training ground,” said Lamaze, currently ranked number three in the world.  “I think I’m doing the right thing!”

Lamaze and Chacco Kid, a 12-year-old chestnut Oldenburg gelding (Chacco Blue x Come On), faced off against 37 entries in the $70,200 1.60m Akita Drilling Cup with six advancing to the jump-off over the course designed by Leopoldo Palacios of Venezuela.  With a time of 35.32 seconds over the short course, Lamaze took the win over Switzerland’s Steve Guerdat who stopped the clock in 35.53 seconds riding Alamo while Egypt’s Sameh El Dahan delivered another clear round in a time of 35.67 to take third.

“It’s always good to win on the first day because you don’t know what is going to happen the rest of the week!” laughed Lamaze.

Lamaze will saddle up Coco Bongo, owned by Artisan Farms and Lamaze’s Torrey Pines Stable, for the $460,000 BMO Nations’ Cup at the CSIO5* Spruce Meadows ‘Masters’ tournament on Saturday, September 8.  He will join Lisa Carlsen of Okotoks, AB, Kara Chad of Calgary, AB, and Ian Millar of Perth, ON in representing Canada in the prestigious team event.

Based in Wellington, FL and Brussels, Belgium, Lamaze is the all-time money winner at Spruce Meadows with career earnings in excess of $5.8 million at the Canadian venue.