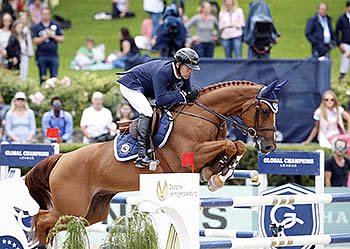 Doha, Qatar – Canada’s Eric Lamaze, riding alongside Harrie Smolders, led the Hamburg Diamonds to the overall victory in the final event of the Global Champions League held November 10 and 11 in Doha, Qatar.

Lamaze incurred nine faults in Friday’s opening round, hindered by two broken ribs suffered days earlier, while his teammate, Harrie Smolders of The Netherlands, jumped a clear round to keep hopes of an overall victory alive.  On Saturday night, Lamaze delivered when it counted most, producing a clear round aboard his 2016 Rio Olympic bronze medal partner, Fine Lady 5, a 14-year-old bay Hanoverian mare (Forsyth x Drosselklang II) owned by Andy and Carlene Ziegler’s Artisan Farms in partnership with Lamaze’s Torrey Pines Stable.  When Smolders matched his fault-free performance riding Don VHP Z, the Hamburg Diamonds secured the 2017 Global Champions League title with a total of 312 points over Valkenswaard United, who kept the pressure on right until the end and finished runner-up with 308 points.  The Mexico Amigos finished a distant third with 250 points.

The Hamburg Diamonds won a total of €2,269,614 in prize money throughout the 2017 Global Champions League season.  Lamaze, Smolders, and six-time British Olympian John Whitaker were joined by Audrey Coulter of the United States and Jos Verlooy of Belgium, both two-time World Cup Finalists, in representing the Hamburg Diamonds over the course of the 2017 season for owners Copernicus and Euro Horse.  Two riders from each team are selected to compete in each of the 15 Global Champions League events held around the world.

“Thank you to Axel Verlooy and the Coulter family for including me on their team this season,” said Lamaze, 49, who rode alongside Smolders, Coulter, and Jos Verlooy during his 2017 season appearances.  “When Axel first approached me, I didn’t hesitate to join such a strong team.  It took the best riders to win the championship title.

“I would also like to thank my owners, particularly Andy and Carlene Ziegler, for allowing me to ride their horses in the Global Champions League this year,” added Lamaze.

Lamaze has two competitions left on his 2017 schedule.  The three-time Canadian Olympic medalist will compete at the CSI5* Paris Masters in France from November 30 to December 3 before heading to Switzerland for the CHI Geneva from December 7 to 10.  In Geneva, Lamaze will defend his title in the innovative Rolex IJRC Top Ten Final, which offers 475,000 Swiss francs in prize money to the top ten ranked riders in the world, on Friday night, December 8, as well as contest the Rolex Grand Prix, part of the Rolex Grand Slam of Show Jumping, on Sunday, December 10.