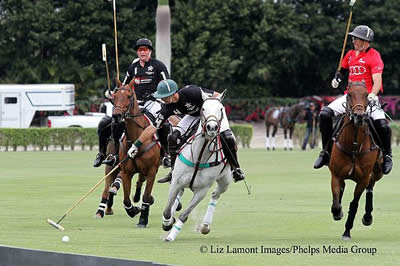 Wellington, FL – February 5, 2015 – In one of the widest victory margins in high-goal play this season, Enigma rolled over Audi 16-10 Thursday in the Ylvisaker Cup at the International Polo Club Palm Beach. Not once did Enigma let go of its lead or give Audi even the slightest chance to tie the score.

You had to wonder how many cups of espresso the Enigma players had downed or maybe what they ate for breakfast (“Corn Flakes!” said their smiling patron later). These guys came out firing on 16 cylinders and stayed in overdrive until the final horn.

As far as anyone knew, Audi was coming into the match a force to be reckoned with. The team was fresh off its win Sunday in its first match of the Ylvisaker Cup and its win in the Bobby Barry Cup finals less than two weeks ago. But somehow things just didn’t gel for Audi on Thursday.

Showing straight away who was in charge, Enigma made four staccato goals – bam! bam! bam! bam! – in the first chukker, with Jeff Hall and Carlucho Arellano each scoring twice. Arellano had to work extra hard for his first goal, as he was chased down relentlessly by Freddie Mannix and took a big bump from Nic Roldan just before he reached for the ball in front of goal. Audi was scoreless until the second chukker, when Mannix and Lucas Lalor scored from the field, both within 60 seconds of the warning horn.

Audi started to perk up in the third chukker, which opened 6-2 for Enigma. Roldan poured it on like nobody’s business, making two goals from the field in quick succession. In classic “Roldan rampage” mode, he tried nonstop to turn things around for Audi. In a mad dash on goal, he made a daring acrobatic move. Desperately trying to keep the ball, he reached out on the offside a lot farther than gravity should have allowed. In each of the following chukkers, Audi made two goals (all but one provided by Roldan) But try as it did, time and time again, Audi just couldn’t decode the Enigma machine.

Enigma rolled like an avalanche down Mont Blanc, its threat increasing with every inch of ground it covered. At the half Enigma led by three points, continuing to widen the gap by another point each chukker – moving ahead by four points, then five, and finally six at the end of the game. Six of Enigma’s goals in the second half were delivered by Arellano, whose marksmanship was so precise he looked like William Tell using an arrow to split an apple in half atop someone’s head. (When asked about his performance, a humble Arellano shook his head and replied, “The only thing I want to say is: Glory be to the Father. He really helped us today.”)

Noting that a team needs a bit of luck to win, Hall said, “We have a hell of a team. We told ourselves to go out and play the same way we have been – don’t change a thing, and we’ll be fine. And I really believe that’s the case.”

Matias MacDonough, Enigma’s captain, said he told everyone at the pre-game meeting, “Look, guys, if we can get up by a nice difference before the end of the third, I think that’s the key to the game. We need to get fired up right at the beginning.”

An always gracious Jerome Wirth said, “I feel sorry for Audi. It’s a good team. But you need a winner, and I’m happy it was us. It’s a great victory, and we’re still on track for the quarterfinals.” (Enigma’s next game is the featured match on Sunday at 3 p.m.)

Despite an unrelenting downpour several hours before Thursday’s match – which caused other major equestrian events in Wellington to cancel the day’s classes – players without exception said the field played beautifully, owing to the excellent drainage and field care at IPC.

IPC will be teeming with 20-goal play all day long Friday as the Ylvisaker Cup continues. The 10 a.m. match pits CT Energia against Valiente. There are two games at noon: Casablanca vs. Tonkawa, and Villa del Lago vs. Gateway Merchants. The final game of the day is Coca-Cola v. Lucchese at 3 p.m.