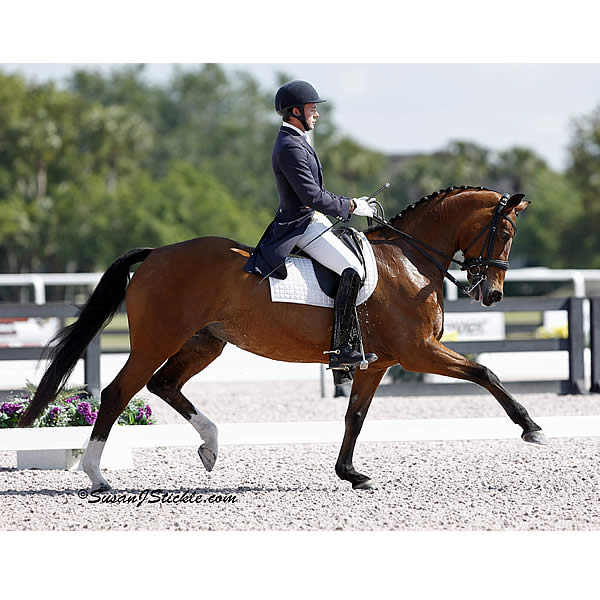 Endel Ots and Verida during the Dressage National 5. (Photo courtesy of SusanJStickle.com)

Wellington, FL (April 17, 2013) – “Endel has really brought her along in such a short time. It’s great to see her reach her potential at this level,” said an ebullient Donna Cameron of Cutler Farm Dressage in Medfield, Massachussetts about the Prix St Georges debut of her mare, Verida, under former USDF Prix St Georges Horse of the Year trainer, Endel Ots, during Dressage National 5 at the 2013 Adequan Global Dressage Festival.

Verida’s inaugural FEI Prix St Georges test was Tuesday morning and she won the class with a 69.868%.  Ots and Cameron were very pleased with her performance and the win “was the icing on the cake”.  Little did they know the best was yet to come.  On Wednesday the pair returned to the arena for what was now Verida’s second  FEI Prix St Georges test, and again she won the class this time with an even more impressive score of 71.974%.

“She’s a lovely horse to ride,” Ots said.  “All her changes were big, clean, and consistent.  She has a great work ethic and really enjoys her job and the show ring.” For Cameron the win is a little bitter sweet as Verida, who is by the famous dressage sire Rosseau, was purchased as an investment prospect. “She is really showing her ability at the FEI level and I may find myself having to compete against her in the future. She is proving she will be hard to beat,” laughed Cameron, who is also in pursuit of earning her USDF Silver Medal. “ I know Verida is destined to become someone’s incredible dressage partner.” Verida will stay in training with Endel Ots at Lionshare Dressage in Wellington until she is sold.

Cameron and Cutler Farm have been keeping good dressage company, recently announcing that Olympian Heather Blitz, who hosted her first New England clinic at Cutler Farm earlier in the year, will base her training services from the Medfield Massachussetts farm beginning in May. Ots who also hosted clinics at Cutler Farm will be sceduling clinics there again before the end of the year as well.

Ots’s business partner Caroline Roffman is also scheduled to do clinics this year and is an old family friend of Cameron’s.  Roffman used to keep her horses at Cutler Farm Dressage when she lived in Massachussetts.  “Endel is such a successful FEI competitor, as is Caroline,” said Cameron.  “He has trained with so many prominent names, like Lars Petersen, and Hubertus Schmidt.”  Originally from De Pere, Wisconsin, Endel Ots began riding on the family’s Ots Sunrise Farm and worked for DYB Dressage before accepting an opportunity to train with Schmidt in Germany.  He had the 2007 USDF Prix St. Georges Horse of the Year and has scored above 75% in USDF Intermediaire I and Intermediaire I Freestyles. Ots operates Lionshare Dressage with rider and trainer Caroline Roffman, and for more information about their training programs and dressage sales prospects, visit www.lionsharedressage.com.