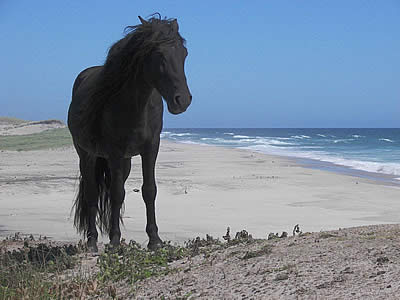 Dr. Phil McLoughlin, a population ecologist from the University of Saskatchewan’s Department of Biology, has been studying Sable Island’s wild horses since 2007. With the help of students and colleagues, he has named and kept track of the life histories and movements of nearly 900 animals over 12 years of research. Renowned for its history of shipwreck and its rugged, wind-swept coastline, tiny Sable Island is considered the home of one of the last remaining herds of completely wild horses in the world.

The 550 horses currently living on Sable Island are the descendants of animals first introduced in the mid-1700s. Their existence is a matter of extreme pride to the people of Nova Scotia, and the Sable Island horse has been noted as a breed of significant conservation interest due to their distinct genetic heritage. Human presence on Sable Island is limited to a handful of scientists, tourists, and the managers of the meteorological station. Its horses have never been handled or managed in any way for over 30 generations.

Using non-invasive techniques, Dr. McLoughlin has taken advantage of this unique outdoor laboratory to better understand how biological and ecological isolation has impacted these special animals. The horses are Sable Island’s only terrestrial mammal and unlike many other wild herds, they are free from predation, interspecific competition, and human influence.

Dr. McLoughlin’s Sable Island research has helped to initiate a new program to better manage populations of feral horses in the Alberta foothills. His work has further implications for the improved management of domesticated horses, from understanding the genetic challenges of closed studbooks to improving best practices which promote equine well-being.