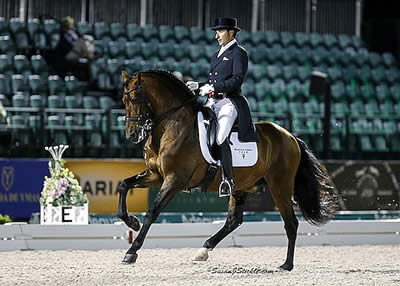 Wellington, FL – January 24, 2015 – Jose Daniel Martin Dockx (ESP) performed a lovely test with Grandioso, a 1999 P.R.E. stallion, in the Week 3 FEI Grand Prix Special presented by the US P.R.E. Association. The duo scored a 72.864% to take home the win in the class that was held beneath the lights at the International Ring at the Adequan® Global Dressage Festival (AGDF). Tinne Vilhelmson-Silvfen (SWE) and Divertimento placed second on a score of 70.647% with Christoph Koschel (GER) and Tiesto coming in third scoring a 69.471%. Tomorrow will conclude Week 3 of AGDF, highlighting the FEI Intermediaire 1 Freestyle class, presented by Chesapeake Dressage Institute, and FEI Individual and Team Young Rider classes.

Dockx was very pleased with the way Grandioso handled the atmosphere under the lights, an unusual circumstance for the class. The large number of entries in the Intermediaire 1 class forced the FEI Grand Prix Special to run later in the day than usual. “I have a horse with great character, and he didn’t seem to care,” commented Dockx on riding underneath the lights. “It was actually better because the day of the Grand Prix he was very warm which made me a little scared it could be too much for him. Tonight it was a little cooler, and he doesn’t seem to care if it is day or night.”

Click here to see the winning ride for Martin Dockx and Grandioso!

As for their test, Dockx was happy with the mostly mistake-free week the pair has had and saw improvement in their tempi changes in the Grand Prix Special. “I was very happy with the one-tempis because in the last two or three shows I always miss one or two changes and this weekend we didn’t miss one. It is difficult for him to do the tempis on the centerline, and he did very well with it today,” he continued.

Vilhelmson-Silvfen and Divertimento had a lovely test, placing them second in the large class. The pair, who has had a very successful beginning to their 2015 season, continues to improve with each outing. “I am quite happy with him after tonight. I was a bit worried about riding him in the dark under the lights, but he took it very well,” she smiled. “He was very nice to ride today and we had a fault free test, so I am always very happy with that.”

“I was very pleased with his pirouettes today and also that there were no mistakes in the tempis. He can get a bit nervous and they can be difficult and I’m happy we did them without any bobbles. We had a mistake in the Grand Prix so I was glad that we were able to go mistake-free there today,” said Vilhelmson-Silvfen when describing her ride on the big Westphalian gelding.

Sabine Schut-Kery (USA) also had a great day, topping another large class in Week 3 at AGDF, taking home the win aboard Sanceo, a 2006 Hanoverian stallion, in the FEI Intermediaire 1, presented by Chesapeake Dressage Institute, scoring a 71.184%. Tina Konyot (USA) placed second on a 70.895% with Wyoming, followed by Kimberly Herslow and Rosmarin in third scoring a 70.763%. The top five riders in the class were all U.S. riders.

Schut-Kery and Sanceo, who has had a phenomenal beginning to their 2015 season, continued their success with another big win at the CDI W level. “He felt very energetic and was very with me. I was able to make adjustments, which is always so important. We did have a bobble, which was my mistake,” she admitted. “I just lost him in all of that power!”

The duo, which also took home a win yesterday in the large FEI Prix St. Georges class, continued to impress the judges today. Schut-Kery is regularly based in California so the trip to Wellington each year is an investment she truly believes in making. “This is my second year at (AGDF) with this horse, but I have come in the past. The facility here and the entire show are just incredible, specifically the footing, but everything is just first-class,” she said. “To have this kind of consistent footing makes you as a rider feel so comfortable going into the ring. I know I can trust the footing out here, and it allows me to be playful and push for more.”

Sanceo’s owners, Alice Womble-Heitman and Dr. Mike Heitman, made the trip from Texas to watch the stallion compete at AGDF this week and Schut-Kery couldn’t more proud of how they performed. “I am so grateful for my owners. I wouldn’t be having this interview without their incredible support. We have a great relationship; we make decisions together, and I am just so proud that she chose me to ride this horse,” she commented. “It was just a phenomenal weekend; they won the Jill Irving Owner Award, which was presented last night. Everyone always wants to know what is going on with the horse and rider, but really the owners are the ones who make this possible.”

Several awards were given throughout last night’s “Friday Night Stars” festivities. These awards highlighted the commitment of owners and recognized high scoring performances throughout the week at Adequan® Global Dressage Festival. The Best Owner Award for Overall Highest Score in the National Show was presented by Jill Irving and awarded to Farah Rizvi (USA) for her outstanding performance at the National competition in the USEF First Level Pony JR/YR classes aboard Prince Z.