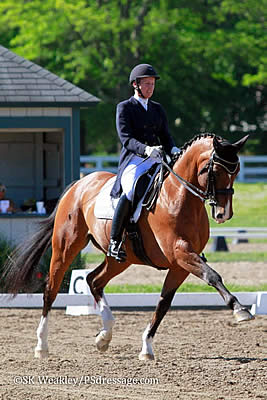 They received high marks from the judges in the FEI Grand Prix, Intermediate A and Intermediaire II at the May 22-25 show in Lexington, KY.

“Mr. and Mrs. Leatherdale and I are very happy with Chrevis Christo,” Creech said. “He is such an exciting horse and already shows so much promise and potential. This is the first year we are competing at this level and he is stepping right up to the challenge.”

The partnership of Creech and Christo has steadily improved in the Intermediaire II. At the Adequan Global Dressage Festival series in Wellington, FL, they began the season in early January with a 66.316 percent and by early February, they had increased their scores to 72.105 percent.

“He’s very talented boy and if I may say, he’s a total lovebug, who can’t get enough of smooching his people,” Creech said.

Situated 20 minutes from Minneapolis, MN, Leatherdale Farms is a privately owned farm owned and managed by Louise and Doug Leatherdale and dedicated to Hanoverian, Trakehner and Oldenburg breeding. The Leatherdale family owns several licensed stallions based in Germany at Hengstation Jens Meyer: Hanoverians Dorum, the premium elite, Damsey (Dressage Royal), First Dance (Florestan II), Rob Roy (Rubin Royale), Hampton (His Highness), Beltano (Belissimo M); the premium elite Trakehner, Herzensdieb (Tambour); and the Oldenburg Fairbanks (Flemmingh). Frozen semen is available in North America and Europe. Leatherdale Farms was also the owner of the Licensing Hanoverian stallion His Highness, who died in 2007 and whose progeny is much appreciated all over the world.