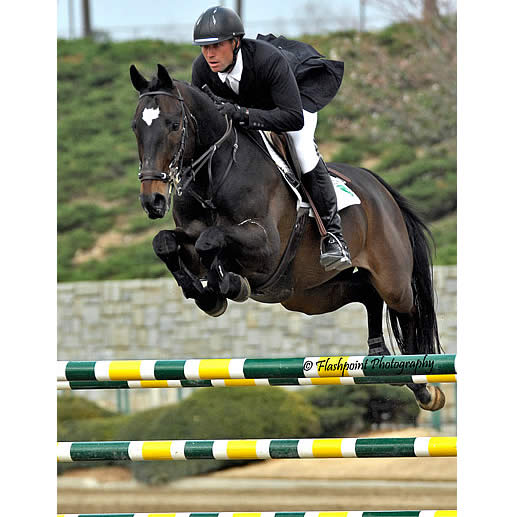 Devin Ryan pilots No Worries, owned by Barbara Rowland, over an oxer on their way to the win in the $25,000 EMO Grand Prix. Flashpoint Photography.

March 30, 2013 – Conyers, Georgia – It was a sold out scene in yesterday’s VIP as spectators watched Devin Ryan from Long Valley, New Jersey make his way to the winner’s circle in the irons of Barbara Rowand’s No Worries to win the $25,000 EMO Grand Prix!  This was Ryan’s first time to the Georgia International Horse Park and the Atlanta Spring Classic and the first grand prix win for No Worries!

Frances Land of Alpharetta, Georgia, in the irons on her own Merlin, was first to go in the prix, but after a first round time of 83.230 seconds and eight time faults, the pair would settle for seventh place.  Next to go was The Coverboy Group’s VDL Zedaldine ridden by Amanda Flint of Long Valley, New Jersey. With a first round time of 91.142 seconds, one time fault and twenty jumping faults, the pair would not place.  Third in the line-up was Collin, owned by Positive-ism, Inc. and ridden by Amanda Wise of Fairfield, Connecticut.  The pair jumped the first round in a time of 89.579 seconds and accumulated eight jump faults which would see them finish in eleventh place.

There was still no jump-off in site, until Joe Fargis of Middleburg, Virginia entered the ring in the irons aboard Sandron’s Lariat.  The pair went clean with a time of 90.416 seconds and would sit in the first position for the upcoming jump-off order of go.

Next to go was Davenport, owned by Hartmut Gutzmann and ridden by Benjamin Rosichan of Tryon, North Carolina.  The pair turned in a first round time of 90.338 seconds with twenty jumping faults and would finish in twelfth place.  Robert Lee, aboard Brook Run Farm, LLC’s El Grecco, was next to enter the ring and finished their first round clean in a time of 85.325 seconds, giving them a second to go spot in the upcoming jump-off. Ryan entered the ring next with Barbara Rowland’s No Worries, and after turning in a clear first round time of 83.948 seconds, let the others know there was actually plenty to worry about with them in the running for the jump-off.

Flint and VDL Theresa Lady, whom Flint co-owns with The Coverboy Group, entered the ring next and after turning in a first-round effort of 85.772 seconds and eight jump faults, would settle for ninth place.  Adam Cramer of Pittstown, New Jersey and Equi Sport LLC’s Luke 54 were next to go and turned in a first round effort in 89.108 seconds with eight jump faults which would see the pair finish in tenth place overall.

Frances Land of Alpharetta, Georgia and her own Vieanne were next to go, and after a first-round clean effort in 81.560 seconds would see themselves in the jump-off line up.  MaryLisa Leffler of Brookeville, Maryland riding Paulexi LLC’s Quastor Van De Helle Z added themselves to the jump-off order after turning in a clean first-round effort in 87.156 seconds.  Devin Ryan returned to the ring, this time aboard Eagle Valley Partner’s Zosja, winner of the $5,000 Open Jumper Welcome class on Wednesday, and turned in an eight fault effort in 85.143 seconds which would seat the duo in eighth place overall.  As the last to go in the first round, Flint entered the ring again, this time aboard Superbad, whom she co-owns with the Coverboy Group, and after a four fault first-round effort in 85.601 seconds, would finish in sixth place overall.

Fargis led the jump-off round with Sandron’s Lariat, but with four jump faults at the final fence and a time of 35.021 seconds, would finish in fifth place overall.  Lee and Brook Run Farm LLC’s El Grecco were next to go and went clean, setting the time to beat at 35.811 seconds.  Ryan and Barbara Rowland’s No Worries were next to go and quickly took the lead away from El Grecco after turning in a clean jump-off round in 33.286 seconds.  Land and her own Vieanne were next to go and despite their clear round, their time of 34.991 wouldn’t take the lead and the pair ended in second place.  Leffler was last to go aboard Paulexi LLC’s Quastor Van De Helle Z and although also clean, their time of 35.848 seconds would land them in fourth place overall.

“He is such a fast horse,” commented Ryan.  “I started out conservatively with him, but felt like he was ready to go. So we picked it up and well, there you go!” he smiled.  This was the first grand prix win for “Sydney”.  “We’ve been in the ribbons all winter, won some Welcomes, but this is his first grand prix win.  What a great way to end the winter season together!” said Ryan.  “I also want to thank Sydney’s owner, Barbara Rowland, CWD and all of our sponsors for their support,” he added.

“This was a great show to hit on our way back to New Jersey.  It gave the horses a break, the show facility is amazing — really nice — and the competition was good.  And the Classic staff just makes all of their shows so nice,” he added.  “I really appreciate them finishing up the shows so we can all be home for Easter. That was really considerate of them and I know many of us appreciate that!” he added.