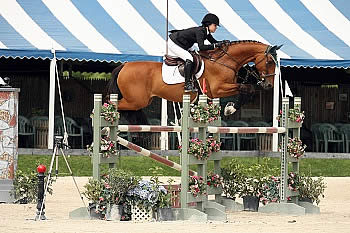 “I thought he wanted to be done (after the FTI Consulting Winter Equestrian Festival) in Florida,” Torano revealed.  “But while we were showing at Old Salem in New York, (my husband) Jimmy called the barn and told them to bring him in from the field because if he was going to retire, it would have to be in Vermont since Capitano loves this show so much.  He’s always done well here.”

“He goes off so much heart.  That’s originally why I retired him.  He wasn’t lame; there wasn’t anything wrong with him.  I just thought he was having to try a little too hard so I thought he was telling me he wanted to be done.  Obviously not!”  Torano laughed.

Capitano has been a beloved member of the Torano family for over a decade, originally competing with Jimmy Torano before Torano took over the ride.  Over the years, Torano and the Holsteiner gelding have gotten to know each other inside and out.

“He’s completely trustworthy and he helps me out.  I know him like the back of my hand and it’s nice to get on something that’s familiar.  He’s totally straight-forward and nice to ride,” she described.

She continued, “We’re very connected.  I feel every little thing on him.  I think that helps us and it hurts us, but I think that’s why he tries so hard.  He knows I’m looking out for him, so he looks out for me.”

Of the three horses that advanced to the jump-off over the track set by course designer Ken Krome, Torano and Capitano produced the only double clear round of the day.  Knowing speed was not their strength, Torano went into the second round focused on navigating a track full of twists and turns.

“He’s not a super-fast horse, so my strategy was to be as smooth as I could.  I failed in a couple of places,” Torano admitted.  “I didn’t think I could get the distance I wanted to jump one, so I added a stride.  It wasn’t a great jump, but he cleared it so it worked out.  He’s a super careful horse.”

Despite having little to no preparation before making his appearance at the Vermont Summer Festival, Capitano proved he is as talented as ever.

“He’s 18 years old and he basically had no preparation for today in the way of riding or jumping or training,” Torano revealed.  “He just wants to be a good horse and he wants to jump the jumps clean.”

The $5,000 North American League Low Junior/Amateur-Owner Jumper Classic was also held on Sunday.  Cloe Hymowitz and Caleta topped a field of 36 entries for the win after laying down a double clear round and crossing the timers nearly two full seconds ahead of the second place finisher, Sima Morgello riding Zopala.

Sunday’s Jumper Classics marked the end of the third week of competition at the Vermont Summer Festival, hosted at Harold Beebe Farm in East Dorset, VT.  The six week circuit continues through August 11.  The Vermont Summer Festival, celebrating its 20th anniversary in its current Manchester location, offers more than $750,000 in prize money, making it the richest sporting event based on purse in the state of Vermont.